I had a couple of bizarro dreams the other night.  I generally do not blog about dreams, but when they evoke a weird Twilight Zone, Jorge Luis Borges, King in Yellow style of WTF — more often than not via an odd book or strange contraption — I feel they are interesting enough to blog about.  One recent dream in particular seemed vivid and bizarre enough to recount here.

When the dream started, I found myself in a small village.  This was less of the wood-hut style village and a little more like small cottages loosely clumped together in a sort of tundra.  I am not sure how I knew, but I felt this was in Alaska.

The people of the village — there were about a dozen — had a problem.  They were running low on water and needed a fresh supply soon.  They told a tale of some “ancient ones” (presumably people, not Cthulhu monsters) that lived either in or past the nearby mountains.  These ancient ones knew of some secret glaciers that these folks could use as a source of water.  At this point, we will gloss over inconvenient plot points such as “how to hide a glacier” and “how to turn a faraway secret glacier into a local water supply.”  Nobody had seen these ancient people in decades, perhaps longer, and none of the villagers felt safe going out to search for them.  They felt I would be best for the task and I thought that since I was travelling in that direction anyhow, I might as well give it a shot.

When they brought me to the road leading off into the mountains, things got a little weird.  Along the right edge of the road, telegraph lines ventured out into the distance.  Because this was a dream and not reality, I just “knew” these were telegraph lines and not power, telephone, or anything else.  Between the first couple of telegraph poles were two women, in dark priestly robes.  Each held a strange staff.  On the left side of the trailhead was a strange “meter” planted in the ground.  A sturdy wood post held a quarter-clockface with two strange, somewhat clock-like, hands. 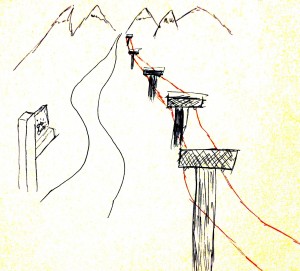 This clock face had markings around the outside, but unlike the uniformly placed numerals you would expect on a clock, there were erratically placed hippie-sounding adjectives around the edge of the face.  One in particular that stood out was “sacred.”  In fact, I woke up thinking of this as the sacredometer (I’m not sure whether or not the play on “om” or “ohm” is intended).  The two hands also differed from a conventional clock.  Well, one hand was similar but the other had an extra hinged joint in it.  That extra degree of movement allowed it to spin in bizarre ways. 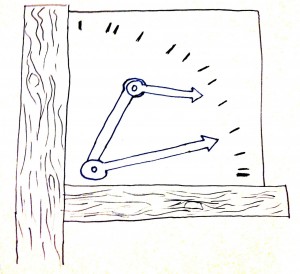 When I arrived, both hands pointed pretty steadily toward two different points, though they floated slightly — similar to how your car’s speedometer or tachometer might float around a particular speed.  As I got closer, though, the smaller extra hinged hand kept trying to track me, no matter where I walked or stood.  It not only spun around backward to point at me, but as I got even closer I noticed it was struggling to peel itself off-axis, fighting its rotational joint to point outward, away from the clock face.

At the same time the clock hand tried to point at me, the telegraph lines started acting up.  There was a definite sizzle of electricity to them.  The priestly staves were made of a reddish wood.  At the bottom end was a brass point.  At the top end was a little platform or shelf with a number hanging off and an antique-looking meter attached.  I remember one number being 47; I do not remember the other.  The meter looked like an old-timey analog voltage or current meter, though I was too far away to make out the details. 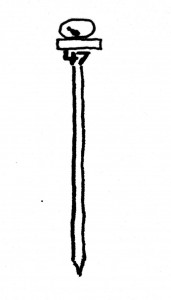 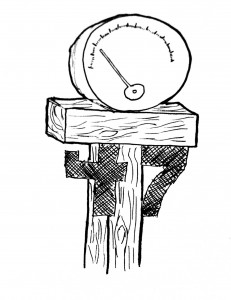 The meters, which originally were close to zero, pulsed near their maximum. The monk-ladies kept looking back and forth between the telegraph lines and the meters on the ends of their staves.

It was about this point, with all the weird stuff going down (presumably from me being too close to that clockface) that I woke up.  The image of that double-hinged clock hand has been stuck in my brain ever since.