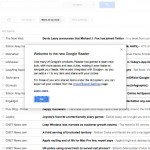 I know that plenty of people have gripes about the new Google Reader interface.  Those gripes revolve mostly around modifications to the social and sharing components.  I tend to not use those, myself, opting to instead follow the trail of possible blogspam to the original source, then manually sharing that on social sites.

No, my gripe is with the crazy amount of whitespace that Google has decided I need.  My goal, when opening Google Reader, is to quickly skim through titles, expand the articles that seem even mildly interesting, and then either read them right there or send them to Instapaper for reading later.  Usually, I would just “Shift-A” (mark all as read).  This was good in the past, made even better by the “Google Reader Minimalistic New Style” Greasemonkey script, which lets you toggle some of the nonessential stuff in the header and sidebar.  (Use the “w” key!)  Unfortunately, the new style adds so much whitespace between titles, making them sparse enough to be sort of difficult to skim, even with this extension enabled.

This is when I ran across “Google Reader Demarginfier,” a Greasemonkey script that will tweak the CSS slightly to remove the crazy amounts of whitespace, returning Google Reader to a look that allows me to easily skim a large number of titles.  Thanks, Krystyn, for pointing this out to me.  And — bonus — it plays well with Google Reader Minimalistic!