Wolfram defines density as “the ratio of the amount of matter (mass) to volume.”  If you ask me, that’s straight to the point — but perhaps a little boring. 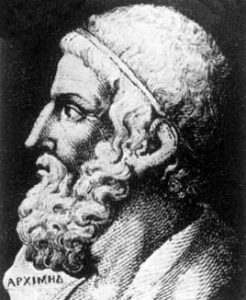 You may have heard of this Archimedes fellow.  That’s him to the right (that’s not Santa Claus). He drew a bath, got in the water, and it overflowed all over the floor.  “Eureka!” and all that.  Backing up a bit, the king (not Elvis) wanted him to come up with a way to determine if a gold statue was pure.  There was reason to suspect that the artisan had maybe cut this particular object de arte with baby powder or laxative or bug power or strychnine or somesuch and was pocketing the excess of gold saved by introducing this impurity.  They knew enough at the time to check gold purity by using this density thing.  You melt down your gold into a cube, measure the cube, then weigh it.  If it was pure, then the weight-to-volume math should work out perfectly.  If the gold was cut with something, it would either be heaver or lighter than it’s supposed to be because the overall weight would be a combination of gold and something else.  Density!  Obviously, the option of melting down the King’s fancy artisanal statuette was off the table.  Archimedes realized you could figure out the volume by dropping it in water, then seeing how much water it displaced.  If the water goes up by 20 cubic centimeters, then that’s the volume of the thing you dropped in there.  It’s a little more long-winded, but does a good job of explaining what density is with an example.

Unless you’re talking about mountains of material, I believe that the ratio most commonly used is grams per cubic centimeter (or if you’re a masochist, you’re using something awkward like pounds per cubic inch).  That means that if you have a cube of any given solid 1cm on a side (or one milliliter of a liquid) at sea level, at room temperature, yada yada yada, it’s always going to weigh so many grams.  If you design something of a given size out of a given element or alloy for which you know the density, you should be able to easily calculate its weight.  Say you design a stainless steel sword blade that’s roughly 30mm x 10mm x 80mm and given a density of, say, 7.9 g/cm3 for this particular alloy of steel and it should end up being (roughly, since this maybe accounts for the parallelepiped prism, but not the stabby pointy tip) 189g.  [1]  Add in weight for the hilt and guard, check the weight distribution, and you’ll know its center of gravity before you’ve even made the thing — that is, will it be a good sword or will it be awkward and unwieldy?  Stand back, I’m doing science!

So I think about this stuff as I’m waiting for the bus or hauling my messenger bag around town.  I (intentionally) have a rather small messenger bag, so it can only hold a specific and finite volume of notebooks, papers, pens, and gadgets.  It also has a weight (or mass, if you want to go all technical on me), but I think less about that because its small size means (given something of average density — not depleted uranium or anything) a small weight.  I think more about the cost of the stuff in there.  Maybe I drop it and everything breaks.  Maybe it slips and falls into the Willamette as I cross the Hawthorne Bridge.  Maybe someone steals it.  Just how many dollars are in that limited space?  What is the most expensive thing by volume? 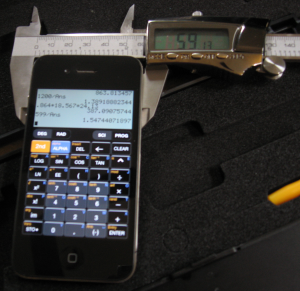 That led me to think about price-density.  How many dollars per cubic centimeter do things have?  Let’s investigate.  Spoiler alert: I used calipers to calculate volume.  I didn’t (intentionally) drop any gadgets in water. 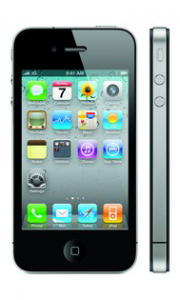 The iPhone is not technically in my bag, but in my pocket.  It is also full of apps that I paid good money for — they add price, but no volume or weight.  I am going to skip the apps in this calculation.  iTunes lets you redownload them and I’d rather not depress myself by coming up with the summation of all the money I’ve spent on apps since the original iPhone because it is not integral to this argument.  According to my calipers, the iPhone is 9.38mm x 58.55mm x 85.52mm.  That’s about 47.0cm3.  The cost is debatable.  Subsidized?  Unsubsidized?  Total cost of ownership (i.e. 2 years of cellphone bills)?  It’s not an iPhone 4S, but if I were to replace it, we’d be looking at the 32G $299 price tag, and I vaguely remember that being the price back when I got it. So contract aside, that’s $6.36 / cm3. 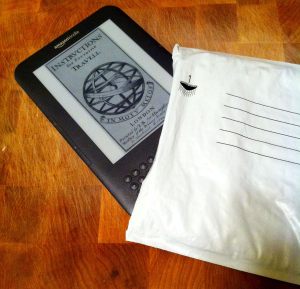 I use my Kindle almost every day.  You can see it pictured here in its fancy signature Marco Arment patent-pending bubble-envelope case.  (I actually have the book-light case, but leave it at the bedside because it takes up too much space in my bag.)  According to my calculations, the Kindle is 8.86mm x 122.95mm x about 191mm (that last measurement I had to do with a ruler — it was too big for the caliper jaws).  That’s about 208.1cm3, a little over four times the volume of the iPhone.  Amazon lists this for $139 (I got mine before the “special offers” subsidy).  That’s $0.67 / cm3. 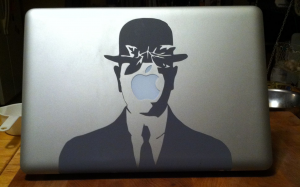 Like the Kindle, I don’t always carry around the MacBook Air, but that’s no reason to leave it out of the list.  I’m still rockin’ the previous generation MacBook Air so it is a little larger and a little heavier than the latest-greatest one.  This laptop has a curved, irregular shape that’s not as easy to calculate as a rectangle.  Understandably, Apple decided to leave “volume” off of its technical specifications (be it cubic centimeters or decibels).  They show the dimensions, when closed, as .16-.76″ x 12.8″ x 8.94″.  I am going to skip trying to define the curve of the case as a function and using calculus to extrapolate the volume.  I’ll just take a straight-up average of .46″ x 12.8″ x 8.94″, or 11.7mm x 325.1mm x 227.1mm, resulting in 863.81cm3.  If we go with the current equivalent list price of $1200, then we’re talking $1.39 / cm3.  That feels a lot lower than I would expect, but then laptops — even thin ones — are several times larger than smartphones, but not quite that many times larger in price. 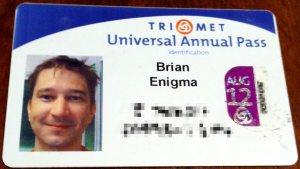 The dark horse in this race is my office-issued bus pass.  It’s an annual unlimited all-zone pass, which is not only pretty spiffy, but has gotten me to the point of letting moss grow on my steering wheel.  I’m sure the company gets some kind of bulk or otherwise incentivized discount from Trimet, but I have no way of knowing what that might be, so have to go with what Trimet lists.  We’re looking at $1012, though that’s not a photo-ID, but a fresh monthly pass mailed to your doorstep every month.  The bus pass is credit card sized: 0.75mm x 53.95mm x 85.52mm.  That’s 3.5cm3.  That’s tiny.  That also gives us a price density of a whopping $289.14 / cm3.  Don’t lose that bus pass!

[1] When I designed this sword in my head, I pictured a 10mm x 30mm rectangle italicized into a parallelogram, extruded to 80cm.  There are two problems with this.  First, extruding to 80mm instead of 80cm makes it more of a dagger or letter-opener and less of a sword, unless you’re a hobbit.  Second, a parallelogram of that ratio would make for a wonky blade with facets of two different lengths.  It really should have been a square italicized into a squished-diamond rhombus.  Mea culpa. 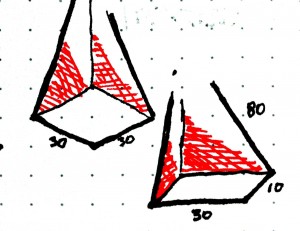