A float tank center, Float On, opened earlier this year here down on Hawthorne.  It has been on my list of things to try for a few months but I never got around to it.  A few weeks ago I was watching Fringe.  As you may know, Fringe has on more than one episode centrally featured a sensory deprivation tank as a mechanism by which the main character can access fringy things like telepathy and traversing into an alternate reality to ours (in which Eric Stoltz stars in Back to the Future, among other things).  Anyway, it was during an episode of Fringe that I hopped on the computer and finally reserved a float tank.

The marketing literature talks about all the benefits of floating — from physical to emotional and psychological.  Your brain hits Theta state and you get dopamine and endorphins.  The extreme buoyancy of the water cushions you against gravity while still letting blood flow (unlike the compression you’d get from a mattress).  This is supposed to sooth your muscles and joints, relieve [What a difference one letter can make in a typo! Thanks, Daniel!] chronic pain, and even lengthens your spine an inch.  (Though if I remember correctly, the spine-lengthening thing happens in bed, too.)  I had no idea what, if anything, I would get out of it.  I figured that, at the very least, it would be relaxing.  With massages, even a not-so-great massage beats out no massage at all.  This couldn’t be much different.

So on Saturday I hopped on the bus and went in for my appointment.  After some orientation, I showered off and hopped into this thing: 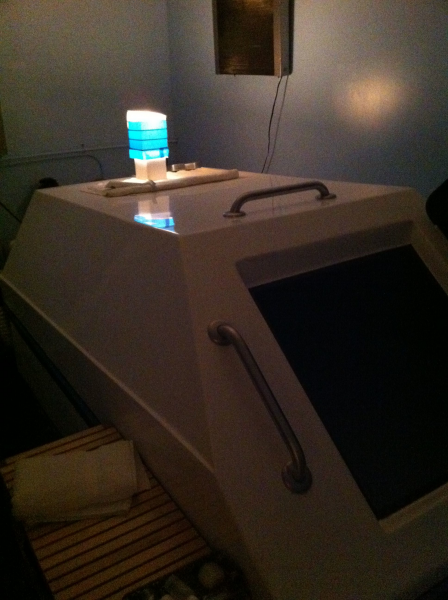 Its foot-or-so of water is filled with this much salt: 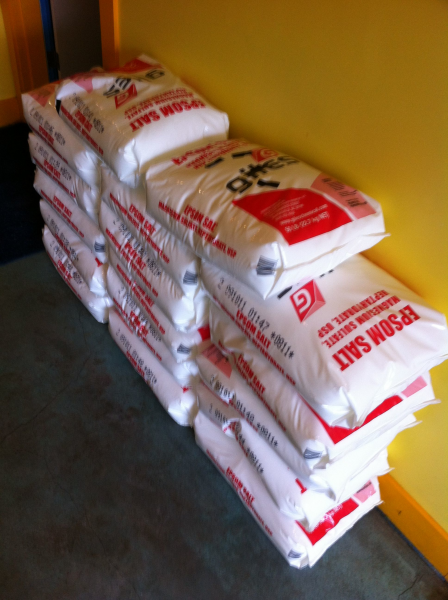 Seriously.  The picture makes the tank look like some kind of tiny Star Trek shuttlecraft, but it was actually more spacious than it looks in the photo.  Like I said, it has about a foot of super-buoyant water and you have maybe 3 or 4 feet above, though they have a couple of “ocean room” tanks with significantly more headroom if you’re a little claustrophobic.  There is way more than enough room head-to-toe.  I could stretch my arms out and touch the side walls with my shoulders at 10-15 degrees from their maximum reach, though normally your arms are much closer in.  What surprised me most about the size and setup was that your head is at the back with your feet nearest the door.

It was definitely warm and relaxing.  I started out going through an acutely self-conscious phase.  I have no idea whether it lasted 5 minutes or 20 minutes or longer.  Since I had never done this before, I was a little nervous and did not know what to expect or if I’d like it.  During this time, I was trying to find a comfortable position for me — the owner had suggested hands behind the head or neck with elbows out toward the sides to give better head and neck support, but that was a little hard on my shoulders so I ended up with arms near my sides and worried a bit about “not doing it right” or straining my neck (though that was never an issue for me).  I would occasionally bump the side, top, or bottom of the tank then push off softly, but hard enough that I’d hit the other side a minute or two later.  It took quite a few tries to find just the right amount of featherweight force to stay adrift in the middle when bumping an edge.  On the brain side of things, I kept getting stuck on trying to formulate what I thought about it and what I’d tell people when I was done, not about relaxation or zen-nothingness or whatnot.

At the end of this self-conscious phase, I realized I did not have to keep my eyes closed.  I had closed them when I entered, or shortly afterwards.  This was also the point that a weird little visual hallucination occurred.  I saw and/or sensed a window in the wall of the room outside the tank.  It was in the back wall, at the head-end of the tank, over my right shoulder.  It had a sheer, yellowed curtain and streamed in sunlight.  There was a shadow line that started at the bottom edge and went about half-way up that occasionally moved, either a branch or someone’s outstretched arm.  Of course, there was no such window in the room.  Even weirder, I only “saw” it when my eyes were closed.  If I opened them, I could no longer see/sense it.  That vision only lasted a minute or so.

The majority of the float felt like being adrift in a tropical sea.  It felt like tall waves with deep troughs (though still well in the range of comfortable) with rip-currents that would lazily spin me around.  I imagine my senses were just picking up on whatever almost imperceptible currents were in the tank and exaggerating them to ocean-size.  As I said, this was the majority of my experience, and it was quite nice.

Toward the end, I got into an “are we there yet” phase.  I tend to be pretty flexible and a few times a day will do a good yoga twist and crack-crack-crack-crack-crack the vertebrae up the length of my spine (and in recent months, my chest, too).  I got to the point where I felt like I really had to do that, but didn’t want to get out of the water.  I now realize there might have been enough room to sit up in there and do it — certainly so if I popped open the door briefly — but I wasn’t sure then and didn’t want to harsh my mellow by getting up.  You can get out of the tank and go to the bathroom or wash salt out of your eye, then go back into the tank and your brain maintains its Theta state.  It’ll keep state for, like, 10-20 minutes, but I wanted to stick it out.  I was able to pop some with some stretches and back-arching, but the rest kept nagging me.  It also made me more aware that the air was a touch warm than I was comfy with — again, that would have been fine by popping open the door for a sec, but I felt I didn’t want to do that.  But then before I knew it, the ambient music faded in, signaling that your ride has come to a full and complete stop.  In fact, I felt the music before my ears heard it.

Was it worth it overall?  Yes.  And I think next time I will be more comfortable with the process and will have enough experience that I can jump past the self-conscious phase and better handle the “are we there yet” phase.  (In fact, I’ll probably do some stretches and twists beforehand to crackle all the bits that want to crackle.)  Will I be going back soon?  I’m not sure.  I think the next bit of money I save up for this sort of mind/body thing will go toward a massage.  Or perhaps I’ll try acupuncture, as I have never done that before (outside of a brief 2-minute pokey intro).