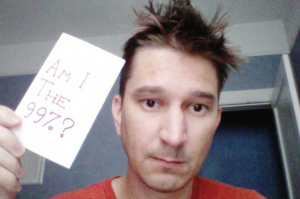 I see the Occupy Wall Street protest.  I have visited our own local Portland spinoff.  I have looked through We Are The 99 Percent.  I think I get it.

It’s not all dirty hippies looking for something to protest, nor kids fresh out of college with fancy degrees but no job prospects.  There are also real, middle-aged, middle-class people.  There are old folks being evicted.  Then there is that 1% of greedy bankers, industrialists, and politicians taking big chunks of money.  Maybe they deserve the income, maybe they got it fair-and-square by betting big on certain stocks or by building a small company up to a multinational.  But they’re not entitled to weasel out of taxes, to increase government spending, and to leave the rest of us stuck with the bill.

I have had three decent comfortably-paying jobs over the past ten-plus years, with no real frantic job-searching between.  I do not know if I am lucky, smart, or resourceful in that regard.  Or maybe I was lucky to get my degree in a technology field?  I am not working three part-time minimum-wage jobs.

I do not eat ramen out of necessity.  I occasionally eat it because it’s quick and cheap, and I am feeling busy or lazy.  I do not fill up on cheap groceries at the WinCo.  I get commodity groceries at the Fred Meyer and sometimes more fancy stuff at Trader Joe’s or organic stuff at New Seasons or directly from farmers at one of the local farmer’s markets. I don’t eat fancy food all the time, nor do I eat cheap food all the time.  The only little mouths to feed are cats—no kids, no clothing or school supplies for kids.

I cannot afford extravagant luxuries, but I was able to afford a 3D printer last year.  And I’m saving up for the the next-generation print head for that printer and/or the new iPhone.  I may want these things now, but am enough of a realist to know I cannot have them now.  Like my parents taught me, I save my pennies until I can pay cash and don’t use credit for indulgences.  If I cannot afford the latest fancy gadget, I reevaluate whether I need it and then buy it when I can.

I have a mortgage.  It’s not super-cheap—certainly not as comfortably cheap as just paying rent somewhere—and eats up big chunks of paycheck, but the loan is not underwater nor in trouble.  There are enhancements I would like to make to the house but, like the gadgets, I’m saving up to do it in the future.

I pay my taxes.  I do not try to weasel out of them.  Being democratic, I know (and celebrate) that tax money is used for socialist endeavors like medicine and welfare.  It helps fund groups like NASA, the NSF, and DARPA, all of whose projects and technology end up in the public sector.  I respectfully disagree with taxes being used for certain  military conflicts, but that’s something that is changed through electing presidents and congresspeople, not by changing tax code.

I employ a financial planner to make sure I’m not eating cheap cat food on the streets when I’m an old man.  (It’ll be all fancy gourmet cat food for me.)  This is one of the top reasons for not feeling part of the 99%.  How many other 99-percenters have financial planners?

So where does that leave me?  In a pure black-and-white view, I feel like I’m on the knife-edge between 99 and 1.  In a more realistic grayscale view, that 99 percent is a gradient from one end to the other.  Maybe I’m in the 98th percentile?  Or maybe I am at 99.002 percent?  I feel like I have a future.  That future won’t be caviar and Dom Pérignon, but it won’t be living in poverty.  If and when things come to ballot, I’m voting against the 1%.