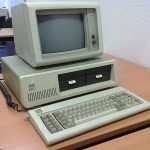 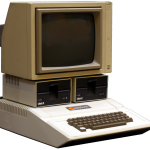 When I was a kid, I did not have much exposure to Apple computers. Well, about the same amount as other kids in my geo/socio/economic sphere. This exposure amounted to Lemonade Stand, Oregon Trail, and Logo (a.k.a. Turtle Graphics) on the Apple ][ computers at school. My family had an original beige-box PC (64K, single-sided 180K floppy drives, 4.77MHz processor, no hard drive) with the super-clicky keyboard because my dad was in aerospace and used it for work. A few friends had Commodores and before the PC, I had an Atari 400 (with the upgrade from membrane keyboard to the real keyboard). But I never really got into Apple.

Later in life, I had to use Apple Macintoshes for a job that was partly retail and partly technical (Virtual World Entertainment, if you must know). Everything about those computers reinforced the stereotype I already had in my mind. They were running the classic Mac OS, System-somethingmumblemumble. I don’t know—I was not really paying attention to the releases. But the computer and OS kept me feeling like they were toy computers for people who were scared of computers and only needed to use a fraction of their overall power. Trying to get one on the internet was a pain—and not a pain in a “study the manual and set these twelve config settings like so” way, but in an obtuse, opaque, and “we only give you these three large candy-like buttons and a text field or two” sort of way. Everything felt hidden and inaccessible behind a veneer of so-called-user-friendliness. By that time, I had graduated out of Windows computers and into Linux boxes, so I was used to (and expecting) to have every configuration option laid bare.

Slightly after that, I learned 68000 assembly language on a Mac. That was painful, at best. Since the entire computer is geared toward graphics and mice, with no real text mode to speak of, getting input and displaying output was much more difficult than I felt it should have been. The PC screen and keyboard interrupts were much more simple and straightforward than those of the Mac. The point of the class was not to wrangle operating system specific interrupts, but to learn the 68000 flavor of assembly language. Although I got very familiar with the secret debug pushbutton of that era of Mac, it continued to reinforce my dislike for the Mac. 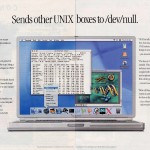 Many years after that experience, I was working in a post-dot-bomb startup (Metapa—Media to all Places—if you must know). We developed an online service that ran under Linux and was initially prototyped on Python (though the bottlenecks were rewritten in C++, once features solidified, for better speed and performance). This is where I first saw a Mac laptop running the first release of OS X. One of the other engineers was using it for development because it ran the same Python and compiled the same C++. I had been thoroughly entrenched in Linux at that point, and this new “OS X” thing instantly made my Holy Shit List.

I am going to assume you are unfamiliar with that term. I have no idea where I first heard it. It is your own personal list of things: of life-changing, world-changing things that make you take pause and say “holy shit.” Every list I have heard is technology-slanted, though I guess that just about anything can make the list. It’s your list, after all, and you can put whatever you want on it. I do not think I have ever written out my list, but I believe it is all technology. 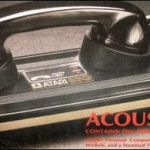 The modem is probably one of the earliest things on my list, before I even knew the concept of the list. You hooked it up to your computer and the telephone line and it “talked” on that phone. It was a technological marvel, mainly because it cheated. The phone system was designed to convey the human voice from point A to point B. The modem took all the numbers in the computer and turned them to sounds that were in the range of the human voice to get across the phone line. Beyond the simple technology, it wondrously shrank the world. Your computer was no longer an island that occasionally received shipments via floppy disk. It was part of a larger, connected world. There were hundreds, thousands, of other people out there similarly trying to bend the computer, the phone system, and the world to their will. Holy shit.

Other things on my list: the Amiga computer (professional-level graphics and sound), the CD-ROM (music AND computer files, and oh-so-many computer files), Infocom text games (not just the games, but the real-world artifacts that came in every box), Castle Wolfenstein (the first realtime 3D game environment I had ever seen; it was all side-scrollers and top-down views to that point), the MP3 file and MP3 Player (Pine made the first one, which looked like a discman, but took whole CDs full of MP3 files), the Nokia Communicator 9000 (PDA phone with internet). All of it: Holy shit.

Seeing that laptop running OS X, with the Unix underpinnings, seeing a terminal open to a bash prompt, seeing that there was a /bin, /etc, and /usr in the filesystem, seeing that apached and cupsd and samba ran as services just like Linux, and seeing that the shiny user-friendly veneer actually manipulated the underlying config files and daemons gave me pause. Holy shit. 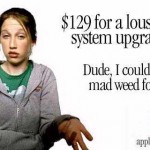 This was around the time Apple was running their “switch” ad campaign (including Ellen Feis’ classic bleepbleepblopbeep the-PC-ate-my-paper ad). They were trying to get folks to migrate from Windows to Mac. I had dropped Windows at that point and was firmly entrenched in Linux. Changing your monitor’s resolution in Linux wasn’t a simple operation like pulling up a dialog box and choosing something from a dropdown. It meant backing up your X11 config file (so that if you totally screwed things up, you’d be able to get back without hours of fiddling), opening it in a terse text editor (vi? emacs? You have to admit that whichever one you prefer, they’re both nonintuitive, nontrivial, and not user friendly), and hoping you made the right change to the right config file. You probably screwed it up, though. Changing something simple often took 10-20 minutes. Setting up a printer? Over a network? Forget about it! Seeing that Apple somehow wrangled all that configuration mess, while still maintaining it under the hood, was amazing. Holy shit.

That computer, that operating system, changed my life.  It was not instant. I was not ready to jump feet-first into the Macintosh world, but I bought my first desk-lamp style iMac then. Over the years, I have slowly accumulated more Apple hardware and less Linux hardware. In fact, the only computer I have anymore that can be termed a “PC” is a dual-boot Windows/Linux machine I use for working from home. (The heavy-duty parallelization software I work on needs real hardware and does not work in a virtual machine, unfortunately.) 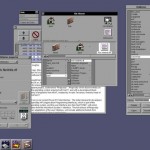 Apple would not have switched to Unix under the hood without Steve Jobs. Without him being kicked out of the company, going to found NeXT, and then being begged back into Apple. He brought all of that Unixy goodness from NeXT back to Apple. He brought Objective-C. He brought that wharf/dock desktop user interface paradigm, the multicolumn file picker, and countless other small things. Most importantly, he brought a certain vision, perfection, and attention to detail that not only productized Unix, but made it easy for the average person to use.

For all that, I am thankful to Steve Jobs. He, no matter how small or indirectly, changed my life. 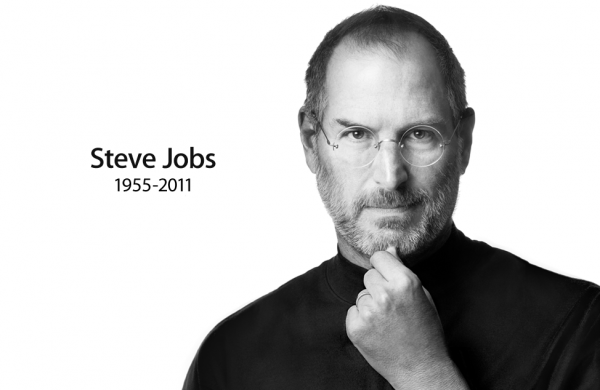