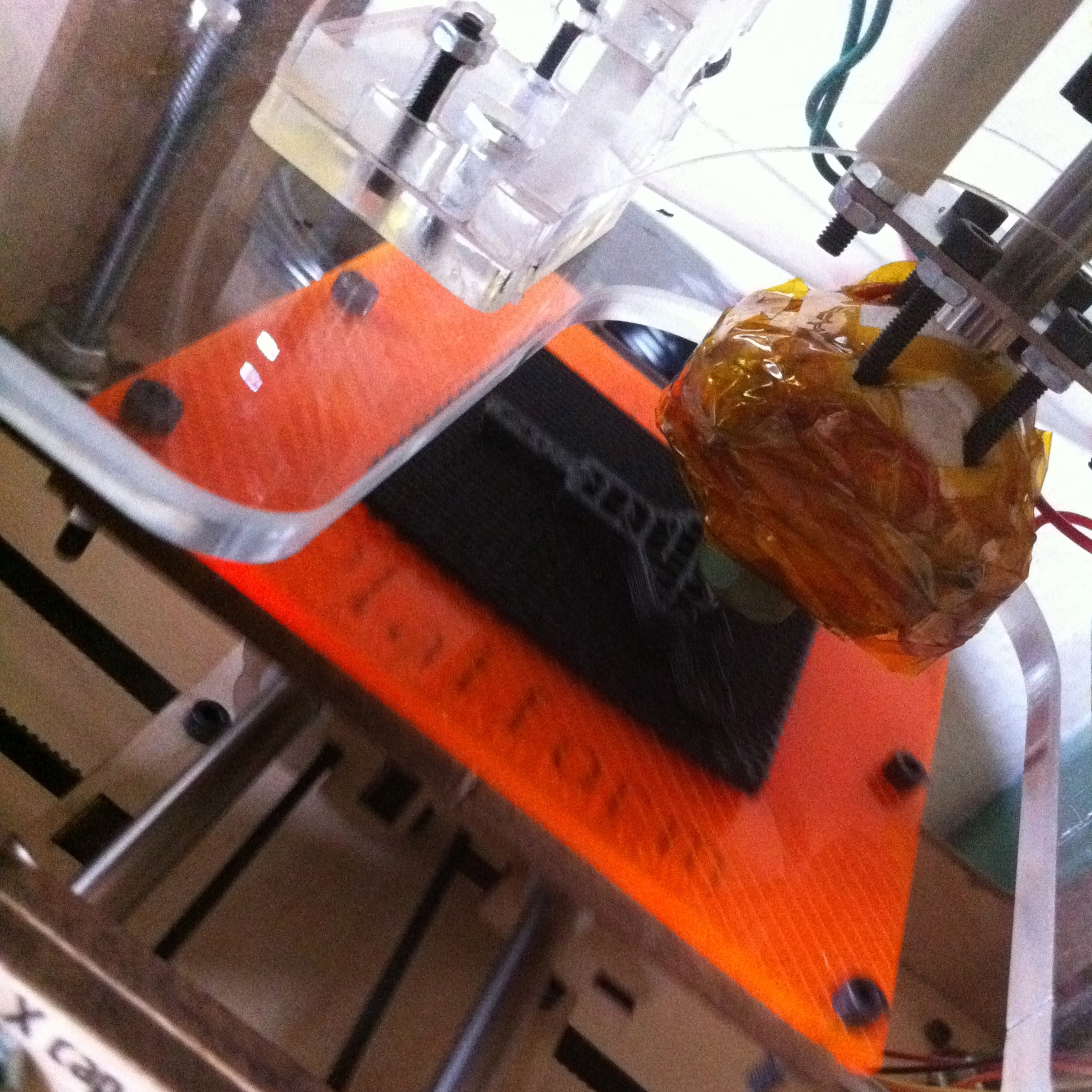 At the beginning of the year, I picked up a MakerBot for (relatively speaking) cheap.  As best as I could tell, it was “last year’s model” and being closed out to make room for updates — but the nice thing about the MakerBot is that it is Open Source and modular.  As updates occur, you can generally swap out parts and pieces and have the latest-greatest model.

For those not in the know, the MakerBot is a 3D printer.  Much like a regular printer deposits pigment on paper, 3D printers deposit plastic (in this instance, but others can do metal, sandstone, or glass) on to a build platform, growing an object a layer at a time.  The professional models of these sorts of printers start at about $10,000 and quickly go up from there, but the current MakerBot goes for about $800, with caveats.

What sort of caveats?  Have you or a friend ever owned an older VW?  You are going to be tinkering, fixing, rebuilding constantly.  And even before that, you will need to assemble and test it.  This printer is not the sort of thing that you pick up from the office supply store, plug in, and go.  It is a kit product that ends up using certain parts and pieces in creative (i.e. “not as they were originally intended”) ways.  That being said, if you are the sort of person who likes building and tinkering, then this may just be the perfect product for you.

First off, I’ll talk about the assembly process.  I have to give them extreme props for providing just about everything you could possibly need, right there in the box.  This includes quite a few tools, too.  I believe the only thing I needed to supply were soldering iron and solder, a few drops of crazy glue and a few drops of hot glue.  The assembly of the physical chassis was pretty straightforward and went a lot faster than I expected.  I ran into a few snags with the toolhead (the hot part that extrudes plastic).  I suspect that the ordering of certain steps within the directions could have been a bit improved.  It had me test part (the resistance of the power resistors) after having wrapped them up in insulation and heat-resistant tape.  Assembly of the electronics packages was not entirely straightforward (mainly confusion around the relays and the toolhead marked as a “no-relay” sub-assembly), but went smoothly once I figured out what was going on.

The overall assembly process took about a week, or maybe a week-and-a-half, to go from box o’ parts to something that squirted out a bird’s nest of plastic (i.e. program running yet to move the platform or printhead, just squirt out plastic). 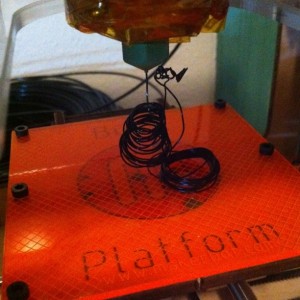 The control program, ReplicatorG, is pretty straightforward.  Even if you have no desire or skill to build up your own 3D models, you can download a design from Thingiverse and print it with the push of a button.  Most things will print out without much problem, but certain details and types of builds will not print optimally (or at all) with the default settings.  I am just starting to play with the hundreds of poorly-documented settings under the hood of ReplicatorG to get certain things to print right.  For instance, areas of high detail tend to spit out too much plastic for me, causing little lumps that the print head occasionally jams into and gets confused as to its position.  I am not sure if this is a general problem or just the tolerances certain parts (e.g. the extruder motor) of my machine.

Once I started printing, I ran into a couple of big snags.  The first big snag was that the Z-stage was not raising correctly.  It seemed like it was binding which caused, in the best of cases, prints to be out of proportion along that axis, and in the worst of cases, the print head to not raise enough and jam into the model, completely messing up the print.  After a few hours of diagnosis, it turned out that one of the Z-pulleys  was a little too close to some bolt heads and would occasionally rub against them, causing friction and binding.  You can see the pulley and bolts in the below photo (from the assembly instruction wiki): 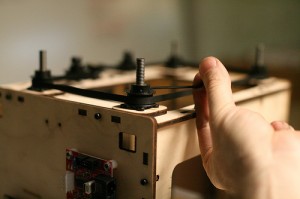 The next problem was with the extruder motor.  It kept shutting down.  Every other motor in the MakerBot is a stepper motor.  This means they use digital positioning and are highly accurate.  The motor that controls how fast plastic is extruded from the print head is a brush motor, meaning it is not only analog, but more likely to suffer from certain common problems… problems like heat (you know, the print head reaches 230℃) causing a winding or two in the motor to short out.  (Of course, this is last year’s model that I have.  This year’s has a much improved extruder assembly, the StepStruder MK6).  The suport folks were really good in helping me through this, with several different options (increasing in complexity from simple fixes to “here’s a schematic diagram of a board for you to build”).

I eventually got the extruder working.  What happened was that these analog motors often have a winding go bad.  This drops the internal resistance of the motor and confuses the board that controls the motor.  This board doesn’t see the resistance it expects, so thinks there is a short of some kind and refuses to apply 12V across a short in an effort to protect itself.  The first fix was to install an 8Ω power resistor in series with the motor.  This worked for a few hours, but then failed.  The next fix was to construct a little relay board.  This… basically worked, but had some unfortunate side-effects.  The controller board tries to vary the current going to the motor (via PWM) so that it can push through just a little, or a whole lot, of plastic.  The relay method sort of bypasses this fine control.  It’s full-on or full-off.  Additionally, because it needs a bit of a lot on the line and a bit of protection from accidentally toggling on and off rapidly (because of the PWM), it needed a resistor and capacitor in there.  The side-effect of this is that when told to shut off, takes an additional 600ms (a little over half a second) to actually shut off, so you get a lot more plastic out of the thing than you probably wanted.  The third fix was a MOSFET-based board and is much improved, but still not as good as the latest-greatest stepper motor based extruder.  Pictured below are the three fixes in chronological order: 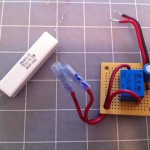 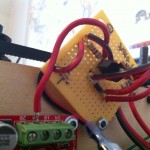 So I am now finally at the point where I am successfully (more-or-less — there’s still a Z-axis binding problem at higher elevations, but I suspect I know what that is) printing things, and even designing a few on my own.  For instance, check out my plastic nickel.

I leave you with today’s moment of Zen: the printer printing. It brings back memories of the old dot matrix printer. Bzzzzt, bzzzt, bzzzzzzzzzzt, bzt.

3 thoughts on “A couple of months with the MakerBot”