I have been a Maker’s Mark “ambassador” since early 2002.  What does this mean?  It means I filled out a postcard for a free shot glass way back when.  The shot glass (and a sort of press kit) arrived and in the years since, I have gotten (alongside press kits and glossy marketing sheets) little bits and bobs from them — from free bar equipment to Maker’s Mark themed wrapping paper.  Despite the logo being warn to illegibility, I still regularly use the little martini shaker they sent.  The wrapper paper got used to wrap a 40 of Pabst Blue Ribbon for a friend’s 40th birthday.  (Lesson: don’t judge a bottle by its wrapping!)  These gifts somehow followed me through several moves, even without notifying them of address changes.  I never know if or when to expect a mailing from them, bit it’s always exciting when I see a box or tube on the doorstep bearing their return address.

Yesterday, they sent an ice tray that makes spherical balls of ice.  I have previously seen this sort of thing at local fancy bars (see also: the giant ice CUBE!) but never knew how they were made.  They’re actually great for certain kinds of drinks (e.g. fancy whiskey) because they have much less surface area (and therefore less water dilution) than, say, conventional ice cubes or crushed ice. 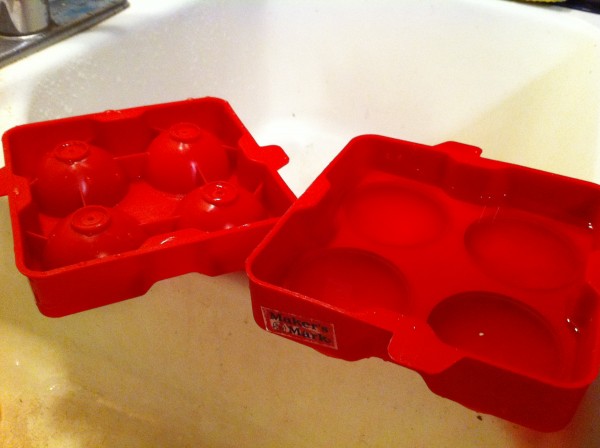 It’s actually kind of cool how it works. The bottom half has really tall sides. When you fill it with water, it holds enough volume for complete spheres. The upper half is tight-fitting with small holes at the tops of each sphere. When you fill the lower tray and squish on the upper one, it forces water into the upper halves of the spheres, with excess shooting out the small holes. In this way, you have a fully completed sphere. 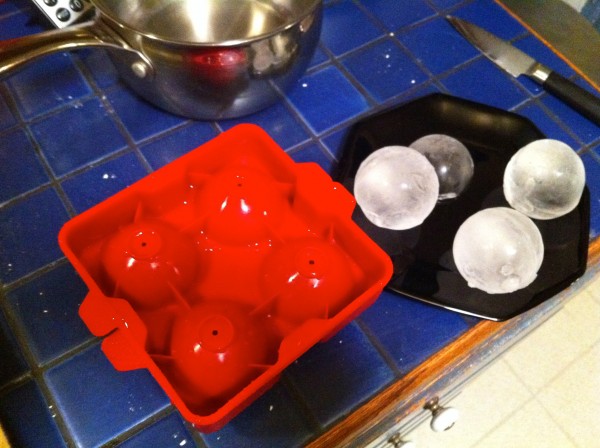 I made the above ice with the haste of a kid on Christmas morning. It is 1.0 ice (as opposed to Ice-9), being far from perfect: big seams, a broken sphere, and the cloudiness of using tap water. I also took the photo with the same haste, so I must apologize for the poor composition and blown-out red color.

The trays do not appear to be available on their website, but a quick bit of research Googling shows similar (but two, rather than four) trays are available from MoMa.