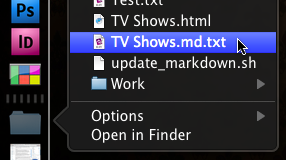 I am a big fan of Dropbox, the automatic folder syncing service that keeps a document folder synchronized across all of your computers and handheld devices. I became a bigger fan when I found iPhone apps like PlainText, which acts as a Dropbox-synchronized notepad. You can write notes on your desktop, then see and update them on your phone and vice-versa. The files themselves are just text files, not some weird proprietary format, so you can work with them on the desktop, too.

I’ve also started to get intrigued by Gruber’s Markdown “language” (for lack of a better word). It allows you to write text in a simple and readable way that can then be automatically translated to stylized and linked text. For instance, writing something *like this* will make it bold upon publication. Writing [Google](http://google.com) will produce a link to Google. Nested bullet lists are similarly easy.

I have a few notes in PlainText that consist of lists and links. They translate quite easily into Markdown, but I couldn’t find any great iPhone tools for viewing or editing Markdown across a Dropbox share. So I did what any self-respecting Unix admin would do: I wrote a shell script!

Specifically, the shell script looks for files in my Dropbox PlainText folder with the extension “.md.txt”. This indicates it’s a text file in Markdown format. If there’s no corresponding “.html” file or the .md.txt is newer than the .html file, then it generates a new HTML file. 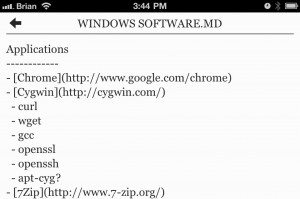 …and then when the script is run, a corresponding HTML file is available: 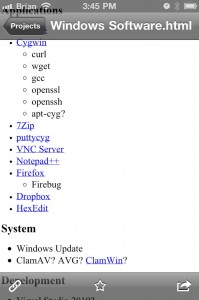 Since I cannot (easily) kick off a shell script from my phone, this is set up as a cron job on one of my desktop machines. It runs every 5 minutes, looks for missing or out-of-date HTML files, then generates what it needs to. I guess I could have made it run more frequently, but the sorts of notes I take rarely change and are mainly used as reference every few days or weeks.

For those that are interested, the script is reproduced here:

I originally tried to do this as a Makefile, but using make to process files with possible spaces in their names proved to be more difficult than expected. Make assumes space-delimited filenames in most places and the tricks to convert spaces to something else, then back, did not mesh so well with wildcards and filenames that are unknown at runtime.