There is a sort of love/hate thing going on here with the squirrels.  I like them in general, but they tend to do annoying things around the property.  They hang upside-down from the bird feeder, stealing seeds and scaring off birds.  They dig up garlic cloves from the garden.  They pee from the tree down on to my car.

When I see squirrels at the bird feeder, I usually spray them through the window screen with water from a squirt bottle.  They run off and chatter at me from a distance.  In fact, these days, any time they see me coming, they chatter from a distance.  And pee from the tree.

I figured that there was no way to get rid of the squirrels, so I might as well make friends and distract them from the stuff I don’t want them doing.  When I was a kid, we had a little wooden squirrel feeder that was kind of advanced — a squirrel’s weight on a platform would push a mechanical actuator arm to pop open the lid of a box full of peanuts.  Since I’ve been re-learning woodworking, I thought I’d attempt to make a simple feeder.

The feeder I built is simple by comparison.  Tt is made from a leftover 1×8 board and all of the pieces join at right angles.  The most advanced part was routing channels to slide the plexiglass window into.  It doesn’t have any fancy mechanics, just a hinged top that the squirrel can manually push up to get a snack. 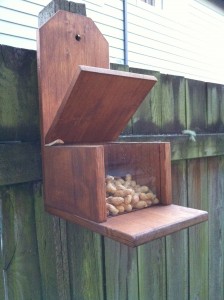 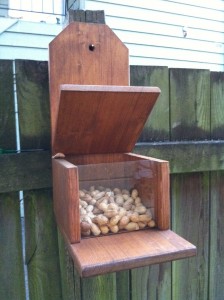 For a while there, it worked out pretty well.  It took the squirrels a little while to figure out how to get to the peanuts.  The large bluejays, which are quite fond of loose peanuts, were thwarted by the plexiglass (not for lack of trying, though — they’d sometimes hammer on the plastic like woodpeckers).

The problems occurred when I let it sit empty for a week or two.  The squirrels started eating the feeder itself. 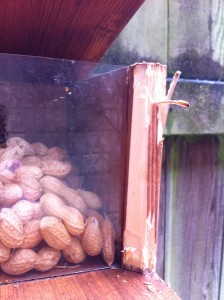 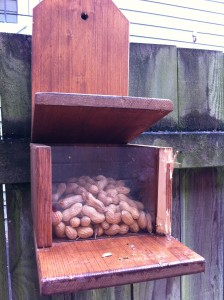 At one point, I watched through the window as a squirrel chewed off a large splintery piece, then proceeded to hold it in its front paws and chew on it as if it were a tiny corncob.  I have no idea why they’d think wood, stain, or sealant would be delicious, but it kind of annoys me that they’d chomp on the feeder like that.  But still, it keeps the squirrels away from the bird feeder and provides another entertainment outlet for cats.

4 thoughts on “Squirrel feeder. I do not think that means what you think.”