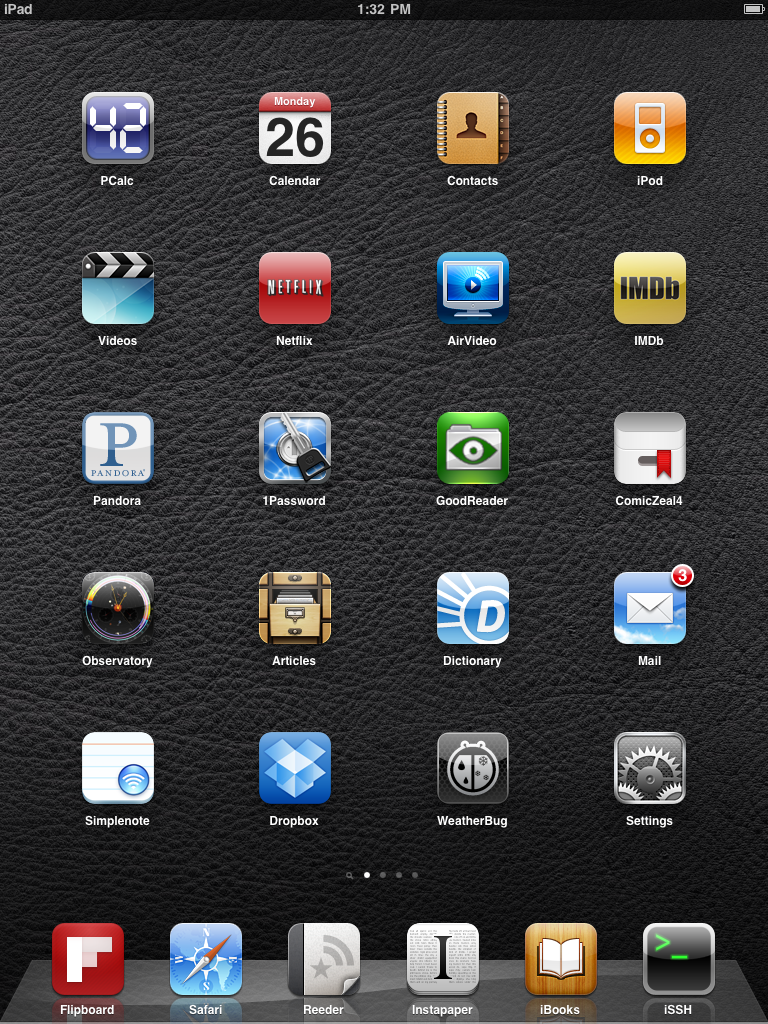 In the last two days, three people have asked me about iPad apps.  I used to occasionally post what apps I was running on the iPhone (the last being in 2008), but have never done this with the iPad.  So in the interest of sharing, let me walk you through my apps.

My dock apps consist of Flipboard, Safari, Reeder, Instapaper, iBooks, and iSSH. Flipboard was the latest addition (replacing Twitteriffic, which I never ever seem to use on the iPad). Reeder is a great iPhone RSS reader that integrates with Google Reader with a ton of great features. It integrates to almost everything from InstaPaper to Delicious to Google Mobilizer to lots of things I haven’t even heard of before. The iPad version has a little bit of a quirky user interface that takes a bit to get used to, but is simple and quick once you understand the icons and modes. Instapaper, of course, is for things I found in Reeder that I didn’t want to read at the time, but instead save for later. iBooks is my main book reading client. I prefer it to the Kindle app. iSSH is a client for SSH and VNC (and VNC over SSH). I use it to remote-control my other computers around the house (or sometimes remotely over VPN). 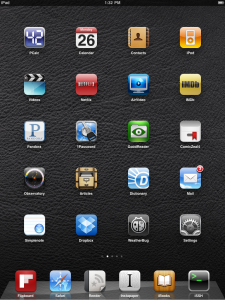 PCalc is a great calculator for programmers. On the iPad, the buttons and overall feel is a little “PlaySkool My First Calculator,” though I don’t know how you could otherwise redesign the UI. It really shines in the fact that you can see decimal, hex, and binary results all side-by-side because it has more than enough screen real estate. I’ll skip past the built-in apps to Netflix and AirVideo. If you have a Netflix account, you want the app. The streaming is amazing. I previously mentioned AirVideo, which allows you to stream (and transcode on the fly if the source is not natively supported by the iPad) from any machine on your network. IMDB and Articles are good single-purpose apps that act as a refined interface to IMDB and Wikipedia. I couldn’t live without Pandora. I’ll bring the iPad into the kitchen and put on a Pandora station while doing chores or prepping food. 1Password is a great little keeper of web logins, credit cards, serial numbers, and all sorts of private stuff. If you’re not using it on your desktop to fill in web passwords (and, as a side-effect, protect you from phishing attacks), you should. The iPad version just got way more cooler now that you don’t have to manually sync over WiFi. You can now sync via Dropbox between computers and devices. That’s downright breakthrough! GoodReader is a great Swiss Army Knife app, acting as a thumb drive, PDF reader, file downloader, and whatnot. In its simplest form, it appears as a shared drive on your wireless network. You can dump files onto it from a desktop computer, then carry them around with you on the iPad. Internally you can browse the shared folders.  It knows a number of file formats and can show you pictures, PDFs, text, and so on. It even has a built in web browser that lets you download files on-the-go directly into its storage share. The Dropbox client is similar, but works with your online Dropbox storage, letting you access it or cache items for offline viewing. ComicZeal appears to be the only good comic book archive (*.cbr/*.cbz) file reader. File syncing is still awkward, at best, but it gets the job done. Observatory is beautiful and shows you the time, the position of the planets, sunrise, sunset, and all sorts of astronomical things related to time and position. I have absolutely no use for it, but it’s pretty. Dictionary is an offline cache of dictionary.com. Simplenote is a collection of text files synced with an online service to all of my machines. It is like a “lite” version of Evernote.  I prefer it to Evernote due to its simplicity and the flexibility of text files across applications.  Weatherbug shows me the local weather forecasts. 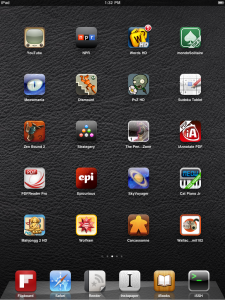 Page two is mainly games and timewasters. YouTube comes bundled. NPR (which I should probably delete because I mainly just listen to podcasts through the player app) and Wolfram Alpha are exceptions to the games theme of this page, as are the two PDF readers (I should probably delete one). Words With Friends is an excellent version of Scrabble that works in the same way as play-by-mail chess. You take turns, a central server maintains the pool of facedown letter tiles, and you finish your game in a couple of days or weeks, depending on how much of a slow-poke you are. MeowMania (as seen previously) and Cat Piano make cat noises. Stair Dismount lets you push your friends down the stairs for maximum damage. Plants vs. Zombies is a silly “tower defense” style game. And it’s like crack. Sudoku is exactly what it says. Zen Bound lets you wrap taunt rope around wooden things for maximum coverage. It’s hard to explain, actually, but quite compelling to play. Sam & Max in the Penal Zone and Wallace & Gromit’s Last Resort are both point-and-click adventure games in the style of the old Lucasarts games. Epicurious is for recipes. It’s beautiful, but I tend to just keep my recipes in Simplenote. SkyVoyager shows you constellations. Mahjongg is what it says. Carcassonne is the iPhone adaptation of the board game of the same name. When pixel-doubled to the iPad screen resolution it is still quite playable. I rarely notice pixel chunkiness. 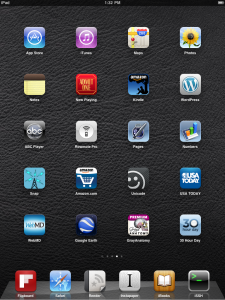 Page three is for built-in apps and leftovers. Now Playing has movie times, the Kindle app is for the times I really need to get at a book from Amazon that I didn’t previously convert to ePub. WordPress is the blogging client (although, honestly, the few times I post from the iPad, I will write the first draft in Pages, then paste it to WordPress or Safari). ABC Player is for watching TV. Rowmote Pro is for controlling my media center box (which was a novelty at first, but I may delete it soon). I have Pages and Numbers, but not Keynote. Snap scans the local area network for machines and ports; it is a simplified version of nmap. Amazon is a rich client to the Amazon website. Unicode is for smileys and dingbats. USA Today is for the news, but I suspect I will be deleting it soon. WebMD and Gray’s Anatomy I got on a whim once to look up a few things. I don’t think I have a good day-to-day reason for keeping them around, but they seem too cool to delete. 30 Hour Day, of course, is the iPhone app I wrote for 30 Hour Day (with no native iPad version … yet). 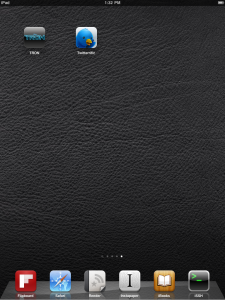 The fourth page are the things that fell off the previous pages. I picked up the Tron game, but haven’t yet found space for it on the games page. I recently replaced Twitteriffic in the dock with Flipboard. For some reason, I just don’t like the Twitter experience on the iPad. I prefer to do Twitter on the phone or laptop.

And now you know what is on my iPad.  Feel free to add questions or suggestions.