Something that I remember hearing many years ago, either in a history class or reading in Astronomical Algorithms, was that centuries ago — when the concept of the Leap Year was first created in the reformed Gregorian calendar — the powers that be adjusted the calendar by a little over a week to make up for lost leap days.  Basically, they chopped a week out of the calendar to make holidays and seasons correctly align again.  The leap day was then instituted so that such massive calendar changes would not again be necessary.

A lot of folks were upset over this.  They thought the church and government were robbing them of a week of their lives.  They would die a week sooner than they otherwise would have.  People were a little more simple back then and could not separate the concepts of measuring time (the calendar) and time itself (you’ll pass on when you pass on, regardless of what church and state decide call that day).

The Panic Software blog has a good digression over the measurement of time, mainly focusing on the “blue moon.”  It turns out that most people’s concept of a blue moon is wrong: that it’s the second full moon in a month.  It’s actually a bit more complex, being the third full moon in a four-full-moon-season.  Part of this digression includes the suggestion “For ‘fun’, check out October 1582 in iCal.”  I do not use iCal, but BusyCal instead, although the net result is about the same: 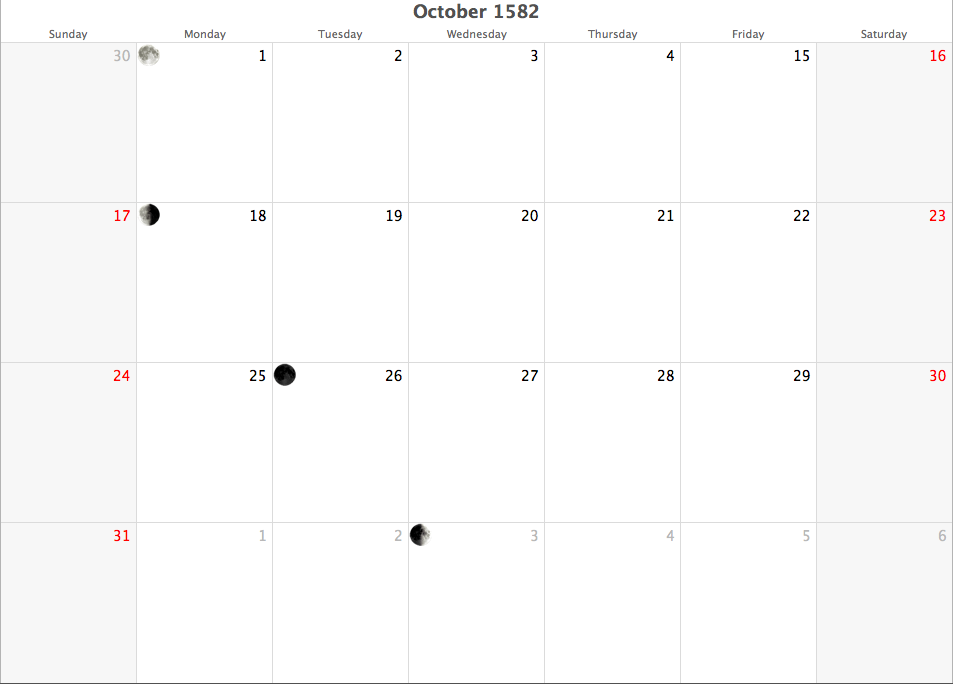 This is the month in which citizens were shortchanged 10 days.