Back in the day, Netninja.com was, beyond a doubt, classified as a hacker website. There was sample code to do nasty stuff. I posted research into Windows security, magstripe formats, smartcard pinouts, and the like. There were even a few dastardly plugins for “Back Orifice” and “Back Orifice 2K”, a “remote administration” tool from Cult of the Dead Cow (CDC).  The actual use for BO/BO2K was less for remote administration and more for pwning computers and messing with people.

Over time, as I became more professional, I slowly removed the blatantly hacking-related content, a little bit at a time. What remains under the current incarnation of Netninja.com is primarily stories. Even so, it took years to get the domain off of the Cyber-Nanny type firewall blacklists.

The topic of hacking, scholarly or otherwise, tends to draw out the idiots and script kiddiez. Back in Netninja’s hacking heyday, I would get several emails a week, mainly asking to help change someone’s grades in the school computer or to bust into someone’s girlfriend’s email or instant messenger. Sorry kids, but Homey don’t play dat.

Of course, as the focus of Netninja migrated, the quantity of those emails tapered. I still occasionally get one every few months, which baffles and amuses me. 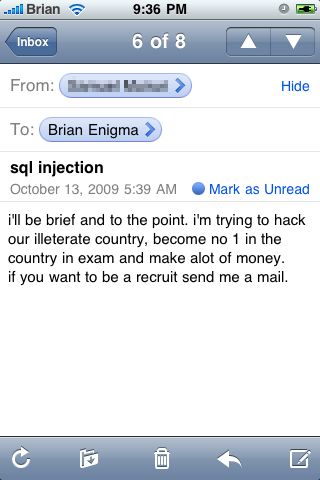 Um, yeah. You sound like, quite possibly, the greatest crimelord in your entire illeterate country. I am sure you have a stunning and well thought out plan. Good luck to you and your endeavors, but do not be offended if I decline a role in that particular adventure.

In fact, while we are on the subject of spelling and grammar, this little gem of graffiti was found on a nearby high school the other week: 2 thoughts on “Letters, oh we get letters”