Normally, I tend to avoid 30-minute sitcoms. There are two, though, that get an exception. The first is How I Met Your Mother, which I may go into detail about in the future. The second is Big Bang Theory. This is a great show that is incredibly nerdy and extremely funny. Despite being a smart show, it has managed to stay on the air for three seasons.

One of the fun things about the show is that what I assumed were the writers (it later turned out to be fans) have created Twitter accounts for the characters, extending the fiction beyond television. When I read the characters’ tweets, I can almost hear the text in each of their voices. Recently, Wil Wheaton was on the show, playing himself (or perhaps, a less friendly version of himself). He also happens to have a Twitter account. Watching the real Wil Wheaton interact with the show’s characters last week gave quite the reality-busting chuckle. The following will probably make no sense if you have never seen the episode in question: 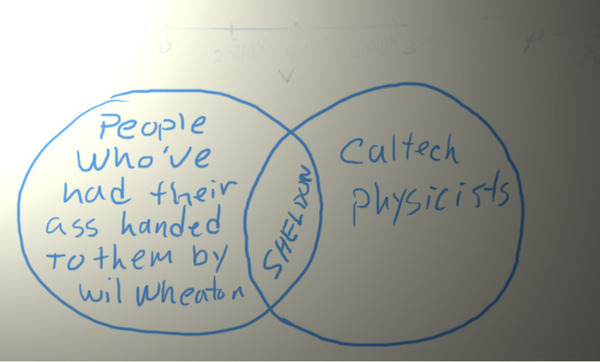