How’s that for a catchy title? You’ll note that I said “a night” and not “my night” up there. That’s one of those tricks sensationalist writers use, much like the misleading or false headline ending in a question mark (“Obama is an illegal space alien?”). You’ll also note that “debauchery” is a nice vague word and can mean many things, but when placed near the phrase “sex club,” certain connotations — whether or not they are correct — are implied.

So as you may or may not know, Ron Jeremy owns a swingers club downtown, Club Sesso. There was a lot of hooplah revolving around its purchase, remodel, and opening. You’d think it was the first sex club in Portland. (It’s not. See also: Angel’s and probably lots of other places I’m not cool or hip enough to know about.) Given the uproar, you’d think we lived in a city that didn’t have the highest number of strip clubs per-capita[1] (that allowed full-nude alongside alcohol, to boot.)

My plan last night was to head down to First Thursday to check out a number of things (chiefly among them the Dorkbot PDX stuff at ON Gallery because I’m geeky like that), but something else caught my eye yesterday morning. PDX Pipeline had a great article about an artist, Andrew Kaiser, showing at Club Sesso. The picture that caught my eye (and everyone else’s, based on buzz at the club) was a nude on St. John’s bridge: 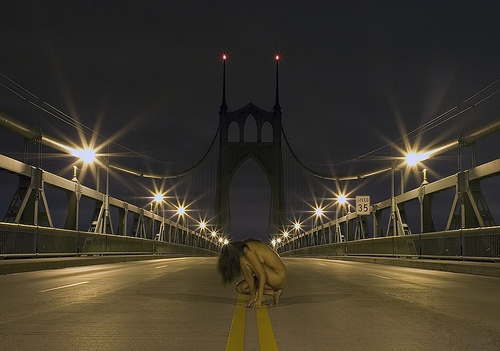 The story behind it is that they had to shoot that really early in the morning and wait for the traffic lights at both ends of the bridge to synchronize red, at which point they had about 15 seconds to take the picture. Of course the morning light was dim, so it took about 4 seconds of exposure, leaving precious little time. They had to work quick, quick, quick.

So this Ron Jeremy sex club was opening its doors for use as a gallery, in a completely non-sexual way (well, aside from the tasteful nude photographs themselves, adorning the walls). There were not going to be any orgies, 3-ways, wife swapping, or whatever else would typically go on in there. It was just a building, a gallery space (though I didn’t look too closely for stains on the couches and was a little surprised they left up the “no nudity at the buffet table” sign.) So mainly, this was my chance to look at amazing art and be able to say “I’ve been to Ron Jeremy’s sex club.” I don’t think I even stuck around for more than 15 minutes.

Oh, and that debauchery mentioned in the title? At worst, it might have been someone having too much wine, but I was not there long enough to notice.

[1] citation needed — I see this fact parroted in several different forms by just about everyone, but have yet to see evidence beyond a rough back-of-the-napkin calculation. Nevertheless, most people here seem quite proud of this statement, whether true or false. We also have a dizzying number of churches, in case you were wondering.