It is no secret that I am a fan of Lost. In fact, I have a whole blog category devoted to the show. Most of my Lost fan-ness is passively listening to podcasts, including The Lost Podcast with Jay and Jack, The Transmission, and I was recently (re-)introduced to Delta Park Gets Lost. I don’t really do the message board thing, as that progressively eats more and more time. While I listen to podcasts, I rarely call or write in with feedback. As I said, most of my Lost is passive (with the minor exception of watercooler discussion at work.) I think this post changes that, in a very nerdy and over-the-top way.

A while back, I heard someone make a remark to the effect of “oh, that’s going to be a good episode because it was written by ___.” Ever since then, something in the back of my mind has wondered if this made sense. Is an episode good because of the writers? Presumably the director, actors, and everyone from special effects to craft services plays a part, in some form or another, in making each episode good. Or is an episode good because of the mystery and the reveals? I thought I would try collecting some stats on episodes, their authors, and their popularity. I hit up the Wikipedia list of episodes for titles and authors. Good quantitative data on episode popularity is difficult to find. I remembered DarkUFO having some kind of episode polls, but was unable to find good, usable data. I learned that IMDB has ratings for individual episodes, so used those, for better or for worse. I collected the data together in an Open Office spreadsheet (lost-writers.ods). I even learned how to use pivot-tables (thanks, Gary!) to make certain pieces of data easier to deal with.

After some thought, I decided to visualize the data as a complex Venn diagram. In this diagram, the circles represented writers and the datapoints (rectangles representing episodes) were to be placed on the diagram in the corresponding places. The episode boxes would be colored: the brighter the color, the higher the rating. I was not sure if I would see many, if any, patterns emerge, but I will let you judge for yourself.

The diagram itself is big. Really big. You just won’t believe how vastly, hugely, mindbogglingly big it is. The following thumbnail is 600 pixels across, with full-size image links below. I’d suggest the PDF — tell Preview (or whatever PDF reader you use) to scale the image to fit your paper, then tell your printer to print at is absolute highest resolution possible, and you end up with a nice, sharp image. 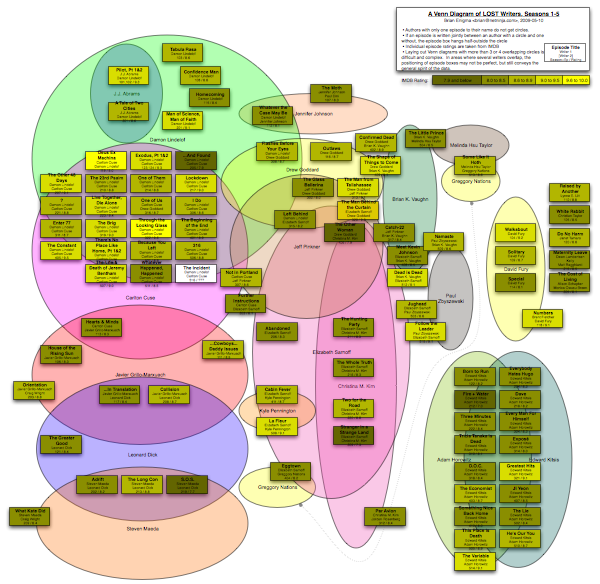 As I mentioned above, you are left to come up with your own conclusions (and are encouraged to leave a comment with your thoughts.) What I see is that the Carlton Cuse / Damon Lindelof pairing hits a lot of home-runs. But is that because they wrote the most episodes, so statistically they’re going to have the most high-rated episodes? Do they just have a better grasp of the overall story? Are they just darn good writers? There are also some good episodes from Drew Goddard and Elizabeth Sarnoff. I have no idea what is going on with Adam Horowitz and Edward Kitsis; they never collaborate with anyone but each other. But overall, I am left to wonder if any causal relationships can be inferred from the diagram. DO good episodes emerge from particular writers? ARE episodes with particular story arc pieces given to specific writers because of their seniority or skill? Are the credited writers the ONLY writers for a particular episode or does the whole writing room staff contribute pieces here and there? In the end, I fear that I am left with neat imagery and more questions. Hey — sort of like Lost.