For a long while, I used Twitterrific as my only Twitter client. It is a great, well written, application that nicely integrates into OS X. Unfortunately, I outgrew it. The people I follow in Twitter generally fall into three groups: the Portland tech scene, the ARG scene, and “other” (which includes friends that fit in neither/both of the previous groups, internet-celebrities, and whatnot.) Twitterific’s everything-in-one-column view got a little too long for me to deal with — this is mainly because I only have the time to check in with Twitter three or four times throughout the workday.

TweetDeck came along and its groups and columns took a little bit of getting used to, but I have never since looked back. Its ability to filter into groups was an enormous time saver. I have been using TweetDeck for a good many months (perhaps a year?) but its OS integration is terrible. For one, it is written in Adobe Air, and for some reason Air hates me. Any time any Air application tries to launch a URL (like, for instance, any tinyurl or twitpic I click on), it decides my text editor would be the best place to open it, not the browser. Of course, my text editor chokes on the filename (beginning with “http://” it was passed), so any clicking ends up being a right-click, then “copy URL”, then pasting it into a browser window, then removing the “event://” that somehow gets prefixed by TweetDeck. Additionally, keyboard navigation and accelerator keys are typically neglected in Air applications. I am not sure if this is the fault of Air itself or the individual application programmers, but it is a common theme.

A week or two ago, I saw brief mention of a Twitter client called Nambu and figured I would give it a try. After a little bit of fiddling with the configuration, I was hooked. It’s basically TweetDeck, but as a native application. This means URLs work correctly, keyboard accelerators, Growl support, better memory footprint, and just an all-around more-OS-X-like feel. It also has the added bonus of threaded responses. 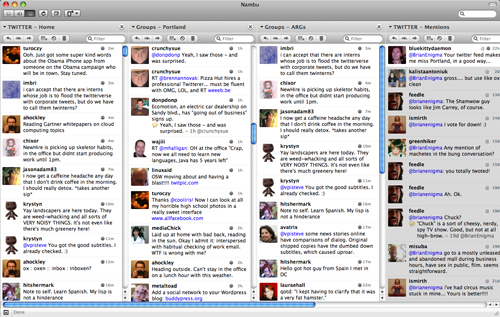 That is not to say everything is perfect. My main gripe with Nambu is that, although it remembers my groups and columns between restarts, it does not actually remember their order. I have to re-shuffle them around each time I start up because they initialize in alphabetical order. Another gripe is that the “Trends” column isn’t quite as nice as the one in TweetDeck. Yet another is that I cannot create a search column. This isn’t as big of a deal, as I put searches (such as #pdx or #pdxtst) in my RSS reader, but it still would be nice to have them in the twitter application itself.

This leads me to the desktop version of Tweetie. This feels even MORE like a Mac application than Nambu. It’s slick. I really want to use it! But in 5-10 minutes of playing around with it, it looks like it does not support any sort of groups, which is a bit of a shame. If it really does have groupings, then I’d love to stand corrected, but ever since I started using TweetDeck, I do not know that I could backpedal on the group feature.

As always, this is my opinion. Your opinion, requirements, and preferences may be wildly different. I just thought I would share my experience. I’d love to hear of other clients that may better fit my needs, but that I might have missed for some reason.

One thought on “Why I prefer Nambu as a Twitter client”