What I have seen of the Kindle 2’s design makes it an enviable device to gadget-lover-Brian. While the first Kindle looked like it was made by Tandy, this updated one looks like it came straight out of Cupertino. It almost looks like an oversized iPod Touch, seamlessly melded with a keyboard, and large enough to be read from. 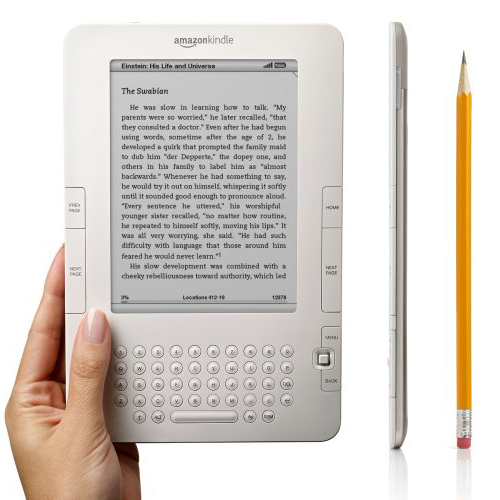 But that’s gadget-lover-Brian. Home-owner-Brian is less sure of the economics of it all. Part of this is related features, but most of it is the DRM and media model.

Sure the Kindle comes with free internet access for webpages and downloadable blog content and RSS feeds. But, you see, I already get that on the iPhone. It downloads all of my Google Reader content, saves it for offline reading, and lets me hit up any website with a zippy web browser. I do not know about the K2, but the original Kindle has these features, but more clunky, in a section of menu labeled “experimental.” While I carry my iPhone everywhere (it’s my phone, datebook, and long-term-storage notepad — as opposed to the Hipster PDA notepad I carry around for quick data-capture), I don’t see myself carrying the Kindle everywhere to access these same features in a less zippy interface.

Home-owner-Brian’s biggest complaint with the Kindle is the media. I’m a big fan of books. After my most recent Powell’s purge, Delicious Library shows me as still owning 514 books. I’m also big fan of letting friends and coworkers borrow books. These two things are at odds with the Kindle’s business model.

With the iPod, I can take my entire existing library of CDs and, with very little effort, load them into the computer to sync to the iPod. It is a matter of telling iTunes to automatically import and eject a CD, then feeding the computer a steady stream of CDs over time as I do other stuff. 500 CDs might take several sessions, but could probably be done in a week or two. I’m trying to imagine doing the same with books. Scan a page, flip the book over to scan the facing page, flip to the next pair of pages. There is a lot more hands-on effort as compared to keeping an eye on the CD-ripping percentage bar. There will probably be some OCR software involved, as you would want to store that content as text rather than images — images that are large, don’t allow re-wrapping of text arbitrarily, and with lines probably shifted by a degree or two instead of being a perfect right angle to the edge of the page. I have a difficult time imagining doing this with one book, much less 500.

The DRM is another bit of nastiness. I’m used to letting people borrow books. The Kindle doesn’t really have a way to do that. I remember reading about some kind of hackery in which you could “loan” your book to another Kindle reader (but then you couldn’t access it yourself until that person was done?), which I guess kind of works — if the sorts of people you are loaning your books to are Kindle owners. To me, that scheme seems awkward at best and impossible at worst because most people I would be loaning books to do not have Kindles. Going back to the iPod/iTunes comparison, Apple had DRM, but there were some loopholes in that regard. You could always burn a few tracks to disc and make a “mix tape” for a friend. You could similarly burn an entire CD to disc and re-rip it (potentially loosing a little bit of audio fidelity) to completely strip the DRM for use in non-Apple-approved MP3 players. Although these were not “features” as bullet points on a marketing paper, they were “features” that contributed to the usability of the device and the content ecosystem in which it lived. The ability to exercise your fair use is important.

If Amazon could somehow fix or circumvent these two issues in the Kindle 2 release (and who knows — they might, we’ve only seen leaked hardware photos and heard nothing of possible service changes), I would be more receptive to the new Kindle. As a frugal consumer, I really do not relish the thought of re-purchasing my existing library in a new format. I do understand that the Project Gutenberg foks have plenty of classics for free, but honestly, the books I really want to read are much more recent releases and not available through that group. I already own the paper versions and understand that “ripping” [no pun intended] them in the conventional format is time-and-effort prohibitive, but maybe Amazon can do something where you scan the barcode and you get the book for free, but with more checks and balances to make sure you don’t just tromp through the library or bookstore and scan everything. Perhaps taking a photo of yourself holding up the book in a non-bookstore-or-library environment? They could use Mechanical Turk to approve and deny photo submissions. This would at least get my existing library into the Kindle. The borrowing I am less sure of, but perhaps they can take a page [another unintentional pun] from O’Reilly.

I do feel that O’Reilly had gotten eBooks right. When I purchase an electronic book from them, I am delivered a plain vanilla PDF. There is no DRM; it can be read by any application or device that understands PDF files. Although it is a plain vanilla PDF, it is computer-generated specifically for me. At the bottom of every page is my name (or email address or some other human-friendly identifying information) and some serial number stuff (computer-friendly account information because names are not always unique.) The onus is then on me to do the right thing. I can share the whole thing with someone if I think them trustworthy. I don’t do that, but I like having the option. I can print out a few reference pages or the introductory chapter for a friend — much like photocopying the same from a print book. Every page points back to me, so I cannot just publish it on The Pirate Bay, but I can circulate it within my social circle, just as I can do with dead-tree books and music. If the Kindle eBooks were to drop DRM and be a more device/software agnostic format, home-owner-Brian would be much more interested in the device and service.