I have this little site I run, StackOverflow.org, which is primarily two things. First, it is a cache of lots of different technical documents all over the internet that I find myself referring to frequently: RFC specifications, language and library references, ASCII charts, and whatnot. Secondly, it holds a Wiki that contains a bunch of how-to instructions, config files, snippets of code I frequently use, shell scripts, and stuff like that. Tangentially, there was a third reason. My main site, netninja.com, was filtered by netnanny-like proxies, until recently, as being a hacking site. I needed a secondary site on which to post a resume because too many HR departments couldn’t see my resume due to content restrictions.

For a long time now — actually, since its inception (originally as BufferOverrun.org in 2003) — the UI and layout mimicked the X Windows window manager I was using at the time, Window Maker, which was an Open Source copy of NeXT’s NEXTSTEP and Sun’s OPENSTEP. 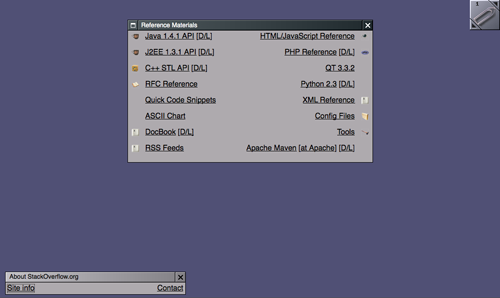 This has bugged me a bit because it has been many years since I used that particular window manager. I am usually at an OS X machine, but when I find myself at a Linux box, I end up using KDE. (KDE because Gnome had too many memory leaks a few years back, causing me to switch and never look back.) Another thing that bugged me was that the local caches of documentation were seriously out of date.

Today, I finally sat down and gave the site a much needed facelift. I borrowed some great Javascript-based windowing routines from BrainJar and tweaked it to have more Mac-like window decorations. I also found an OS X style dock menu implemented in CSS. Putting these together with some of my own HTML and JavaScript, some of Apple’s icon graphics, and a bit of elbow grease resulted in the new Mac-like style. 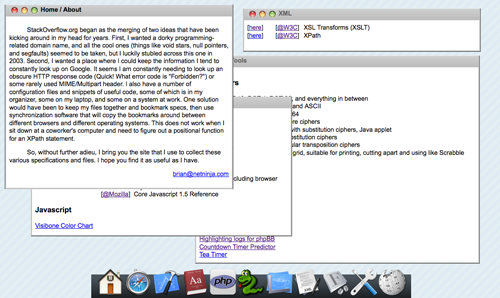 The new design still has a few rough edges. Now that I get to play with it, I am not entirely sold on the windowing metaphor; I keep finding myself trying to Cmd-W to close a “window” and instead close the tab. (Thank goodness for Cmd-Shift-T to bring it back!) I also feel I need those little “running” indicators to show open windows and some kind of “it’ll exit this UI” icon alias overlay for the Wiki and the same sort of thing for text links (like how MediaWiki shows outbound links with a little icon next to the text.) So yes, some technical and conceptual rough spots need to be cleaned up still.

To compare and contrast, the new design is live and the old design is immortalized in The Wayback Machine.