It’s been “one of those weeks.” And by “one of those” I mean “unlike any other.” Here are a few highlights in bullet list form because I don’t feel like spending the time to write them as narrative.

* During the business week: someone got fired but deadlines that he was one of the key players on did not change. We’ve been working like crazy. While my job is often challenging, it’s also usually somewhat calm. This past week, on the other hand, has been quite stressful.
* A Friday dinner at Henry’s Tavern was bland. Plusses include my Boddington’s on nitro and Kim’s black cherry stout. Minuses included being seated next to a large table of Wooooo! girls and my technically-a-cobb-salad. Visually, it looked like a Caesar salad and, as Kim pointed out, cobb salads are usually all about the presentation. There were little cubes of chicken at the bottom of the plate, completely covered by the salad. The hardboiled eggs were cut into little miniscule cubes, about 3mm on a side. The applewood smoked bacon was cut similarly small, but much less plentiful. I thought the bacon was left out entirely until I neared the bottom of the salad and found one bacon bit. I’m still not yet sure if that was the only piece of bacon in the entire dish–there to fulfill the technical requirement of bacon–or if there was more that I didn’t notice.
* Across the way to the Fez, which I haven’t been to in 6 months, perhaps a year. This was good, except I was tired from the aforementioned long week. I had a coke, sans rum, to help give me a caffeine boost. I believe this was my mistake. You see, I don’t really drink carbonated beverages. The few times I do, they usually contain an alcoholic buffer in them–rum and coke, scotch and soda, and the like. I believe it’s really been since before moving up to Portland (what, maybe 5 years ago?) that I have had a coke, and I believe it was even a few years before that.
* Smoky environment plus funny stomach led to leaving early. I walked past all of the “pretty people” waiting in line at Aura and cut through the streets south of Burnside toward the waterfront to grab the bus. Somewhere, on some street corner, I threw up a little in my mouth. Only it was not in my mouth. Ick.
* Yesterday, I fell down our stairs for the first time ever. I am surprised it took a year for this to happen. For those that do not know, our stairs are treacherous. They are less like stairs and more like a one story ladder. They are certainly not up to modern building code and were probably grandfathered in at some point. It has been cooler these days, so I have taken to always wearing socks around the house. While carrying a basket of laundry down, my socked feet slipped and I tumbled and slid. Nothing is broken or sprained, but there is a bunch of torn skin on my arm and ankle and a giant lumpy bruise on my butt.
* Last night I had to run, with my gimpy butt, to catch the bus.
* A fun meeting of Northwest Paranormal Investigations at the Kennedy School. No investigation, just a recap of the one I accidentally missed last weekend and planning for the future. There should be a meeting open to new members in January.

Today will be about relaxing on the sofa, not doing too much work, perhaps playing the new installment of Strong Bad’s Cool Game for Attractive People and possibly walking down to the grocery store to replenish supplies, if my gimpy butt doesn’t protest too much. I have been watching the cats watch the birdfeeder. So far, there has been the regular collection of sparrows, and upside-down squirrel, and some weird bird with a black “bib,” spotted belly, and red under the wings which I have since identified as a Red-Shafted Northern Flicker (huh huh huh hu huh… he said “shaft.”) Also, I almost spelled that “Flickr.” 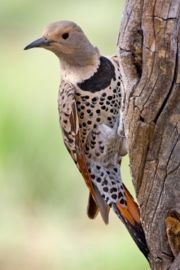 One thought on “One of those weeks”