I Twittered this yesterday but forgot to write a blog entry, so here goes… 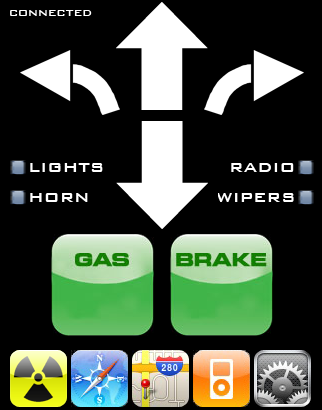 A while back, in fact, not too long after I first saw the initial episode of Dr. Horrible, I ran across links to someone who had crafted together a copy of the van remote iPhone “app” he used. While it looks kind of cool in a desktop web browser, it looks rather crappy on the iPhone itself. It starts out almost too small to see so you have to do the pinch-zoom thing to scale it correctly, then slide it around until it’s centered. Then when you are tapping on things, you might accidentally scroll part of it off-screen. So yeah, it’s cute, but it was not so iPhone-friendly. In fact, it was sort of iPhone-hostile.

A few weeks ago I started off building my own version as a real iPhone webapp. It starts scaled to the right size, doesn’t side-scroll, and only up-down scrolls enough to get to the URL bar. It even has some nifty 3D animated flippy effects when you click on the gears icon. (The animation only works on the iPhone and might work on nightly builds of Safari, but uses some fancy webkit-specific CSS to work.) And if you want to get into minutiae, it prevents you from hitting gas+brake at the same time, left+right at the same time, or forward+reverse at the same time.

As I said, I started it a few weeks ago. I basically finished it that same day, but left a few things that needed a bit more polish (specifically, it had a bunch of filler text on the info screen.) I finally replaced the filler and posted it last night.