Is it me, or is Microsoft’s advertising absolutely schizophrenic? First they started with their two Seinfeld ads. I think I am one of the few that found them to be entertaining. They were fun little short films, but I can see how they didn’t really work as ads–although they did generate a lot of talk, which perhaps means they served their purpose. Now they have been replaced with several “I’m a PC and I’ve been stereotyped” ads. I find zero entertainment, zero fun, and zero rewatchability in those ads. In fact, the way they directly address Apple’s “I’m a Mac and I’m a PC” spots, they seem more like defensive PR spin-control than advertising. I get it. People who use PCs don’t always wear ties and sometimes work in exotic locations, including underwater, space (actually, they tend to use custom hardware in space and NASA is a huge contributor of code to the Linux-based Open Source community), on the farm, and at sewing machine sweatshops. On the flip side, I don’t wear jeans and a hoodie, don’t have “creatives” as “deliverables,” and don’t fit into the stereotype of artists who use Macs. I use my Mac to write code, do advanced math, and edit design specifications. Where’s my ad? My takeaway from these new Microsoft commercials is pretty much zero. No entertainment, no education. Bring back Seinfeld! At least those were awkwardly funny, if nothing else.

In related news, the current run of print advertising they’re doing is bizarro. “Windows, not walls.” I was pretty quick to spot that the thickness of the cutout piece does not equal the thickness of the wall. A coworker (thanks, Rick!) pointed out that the guy is using a sawz-all to cut through walls that have live power running through them. See how it’s plugged in a meter or two from the “window?” 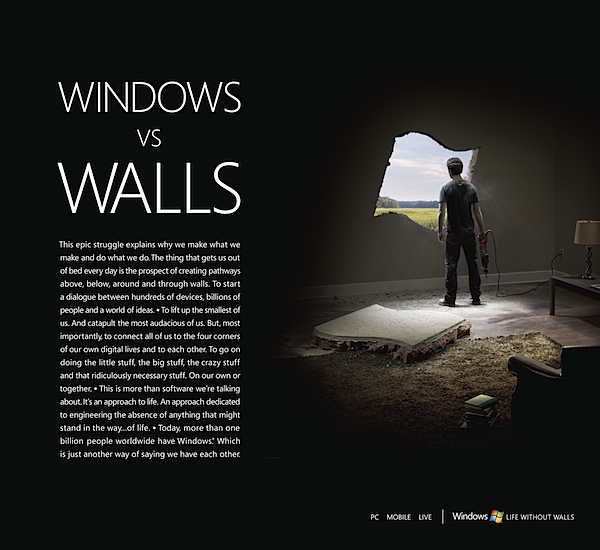 Microsoft, it’s time to be consistent and understandable with your advertising.