Google’s new Chrome web browser looks quite promising. I set up a virtual machine running XP today to test it out. It turns out that it will not run on Win2K (my current virtual machine) and the XP install is from some expired MSDN disc or something and does not have a functional Genuine Windows DisadvantageTM, so will implode or something in 60 days. Hopefully they come out with their Mac version before then.

Overall, it’s quite snappy. I was happy to see that the embedded web server stuff we are doing at work runs just fine through Chrome. I actually assumed it would, considering the underlying engine is WebKit, and I split the majority of my development time between Firefox and Safari–but it was nice to see with my own eyes. The spartan user interface is refreshing. The memory management is incredibly awesome. It was very interesting to pop up the specialized task manager and see how much memory, for instance, the Digg homepage uses.

I would really like to try using it seriously day-to-day. Aside from the obvious shortfall of no Mac version, there are two features that are deal-breakers in this regard. The first is an ad blocker. After so many years of using AdBlock on Firefox, I was surprised and shocked to see that the internet has ads! 🙂 The other feature I would need is bookmark synchronization. Between the office machine and two main home machines, I really cannot be doing this kind of thing manually. Foxmarks does this surprisingly well in Firefox. In Firefox 2, Google even had a Browser Sync plugin of their own (for not just bookmarks, but cookies and history), but support for that was dropped when Firefox 3 was released.

And as an aside, is it just me, or does anyone else get a sort of GLaDOS vibe off of the icon? “The Enrichment Center is committed to the well being of all participants. Cake and grief counseling will be available at the conclusion of the test. Thank you for helping us help you help us all.” 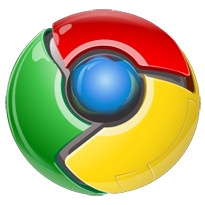