I forgot to mention in my last post that during part of the drive up, we were around and behind Ganesha The Car. 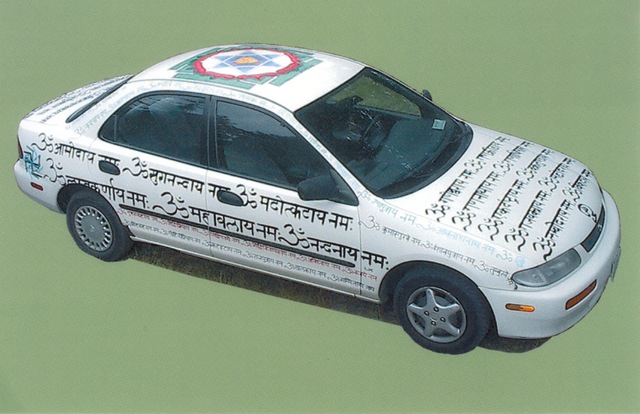 I also forgot to mention (or maybe had mentally blocked out) That Fourteen Year Old. For a little while, as I worked alone, she was outside the booth, looking in at me with a weird and undefinable look in her eyes. Her and her mom came in and started looking around. “Hi, handsome. What do you look like without those [sun]glasses?” Um, what? Did I just hear that correctly? The girl said that, and she was talking to me? After a few seconds of stunned, slack-jawed silence, I figured I had to respond. “They don’t come off.” Hey, it was the best I could come up with while shocked. A few minutes later, when Kim returned to the booth, I think she tried some other tactic, then outright asked how long we’d been married. “It’s not really your business, but 2 years.” “THAT’S NOT VERY LONG AT ALL!” At which point she was told off by Kim, her mom was not terribly apologetic or even communicative, and she went off to pester the massage booth. “Mom! If you give them $20, they’ll rub you for 15 minutes! Where’s my money?!” There was definitely something up with that kid. It was hard to tell if she was just socially stunted or had brain issues going on. At any rate, it was uncomfortable and disturbing. For the rest of the weekend, the kid got the nickname Lolita any time the story came up or she was spotted around the event.