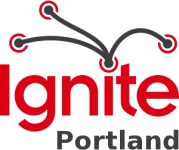 I can’t believe that I forgot to blog about Ignite Portland 3. It is being held on June 18th at the Bagdad Theater again. The lineup looks something like this:

* Dare to Go Where You Fear – Liz Kimmerly
* Fracking robots, dude! – Sharon Greenfield
* The Consumer and the Egg: Negotiating Ecolabels – Michele Knaus
* How To Run a Startup and Not Lose Your Mind – Eva Schweber
* Talking Trash – Meredith Sorensen
* A Short Course On How to Ride Freight Trains – Gerry Van Zandt
* Don’t get mad, make a video! – Phillip Kerman

9:30 Go Home! (or adjourn to the bar for further networking)

I believe that the “presale” tickets (admission is free, but there was a way to reserve a seat) are gone, but general admission is still available on a first-come-first-served basis.

I’ll be getting out of work an hour or two early that day, then walking or taking the #14, depending on the weather.