I picked up a book called The Affected Provincial’s Companion a few weeks ago. This was a book that was indirectly recommended on some steampunk-something-or-other. While not directly ‘punk, it does a great job of capturing the more formal and stuffy neo-Victorian attitude. It is a guidebook of attire and behavior that is written tongue-in-cheek and greatly exaggerates a few things, but actually does have some good information at its core. The silliness makes it more accessible. While poking fun at itself, it even does a good job of making fun of hipsters, dudebros, and backward-hat-and-sportswear gangstas.

Obviously, the book is not for everyone, but if it sounds like the sort of thing you would be in to, you will undoubtedly enjoy it. There are a great many diagrams (some more silly than others.) The one that I have gotten the biggest kick out of is the Bohemian-Dandy Continuum. One of the quotes leading up to it is:

The continuum itself can be thought of as a cylinder. The left and right sides are joined together (so that the dotted line forms an angled oval.) The rich are at the top, the poor are at the bottom, and the intersecting relationship between bohemians and dandys becomes visible. 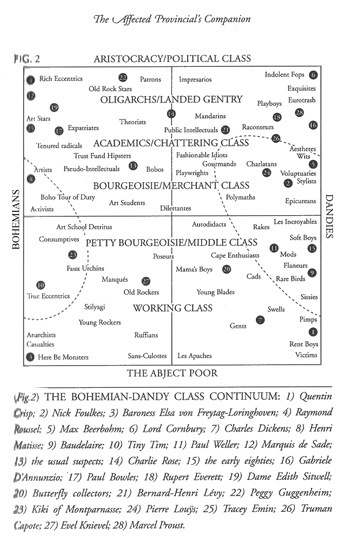 Yes, it is an entirely silly diagram, but the attention to detail! Therein lies the humor!