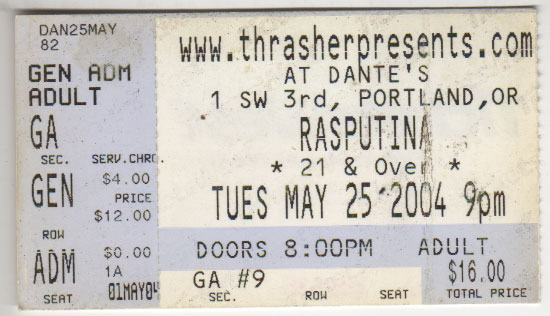 It has been four years since that fateful night were I almost didn’t go alone to the concert of one of my favorite bands.

It has been two years since the roadtrip to the coast, by way of the courthouse (followed several months later by a big ol’ party-slash-reception.)

They have been wonderful years. Like everyone has experienced, there are ups and downs and bits of nervousness — the initial move-in and sharing of belongings and yielding some creative control of the decorating; the occasional drought or surplus of money; day trips and vacations; meeting in-laws; the stress and lifestyle adjustments of buying a house; the joy and creative freedom of buying a house; the silly jokes (“Wii Fit in our jeans”); the warmth and happiness of snuggling together in bed, surrounded by cats who want in on the snuggle-action. I do not think anyone is asking for advice, but I am going to give it anyway: communication. For any kind of relationship, the rock-solid foundation upon which to build it is communication. We have it, are comfortable with it, and are good at it — and it has made the bad times better and the good times amazing.

Even though today is technically our anniversary, last night we went out to Roux for dinner. Roux is one of those wonderful Northwest restaurants that offers 5-star meals in an environment that is a little more relaxed than your typical 5-star affair. It offers up a New Orleans-style French menu with the typical fancy large-plate-small-portion-much-attention-to-(visual and flavor)-detail. Soft shell crab: yum. Salad with big cubes of cheese and sausage: yum. Jambalaya: yum. The jambalaya portion looked a bit small, but it was actually quite filling. Chocolate pound cake and hazelnut ice cream: yum.

During dessert, we thought there was a birthday party with a rambunctious photographer at the front of the restaurant. Upon leaving, it turned out to be rain and lightning. It was warm out, with the-gods-opening-heaven’s-floodgates style rain, with thunder and lightning. Any one of these is a rarity for Portland, but all three together was quite something. In the car, we both agreed that our server was Brenda from Six Feet Under.

Next up on the docket was the new Indiana Jones movie. Now, I’ve heard that your liking of this movie is inversely proportional to how much you liked the previous movies. Or in English, if you’re a big Indy fanboy, you’re not going to like this one. I do consider myself a big fan of the previous Indiana Jones movies, and I have to admit that there were parts I did not like, and the governments-investigating-supernatural/paranormal-phenomena had some undertones that were more X-Files than Indy, but I rather enjoyed this movie. As much as I like any scene with a monkey, the scene with the kid being Tarzan was a bit over-the-top for my liking. The “we’re old” jokes and references were a little too strong at the beginning of the film, but became manageable as it progressed. It was great to see a fleeting shot of The Ark of the Covenant in Hanger 51. Overall, I liked it. It was a fun movie.

One thought on “Four Years”