I picked up the Wii Balance Board yesterday and got to play with it a bit last night. While my first impression of it, upon hearing about it months ago, was that it was gimmicky and dumb, the reviews I have read in the past week or so have reversed that opinion. I do have to admit that it’s still gimmicky, but it’s certainly not dumb. It’s actually quite compelling. The workout you get is about the same as one might expect from a basic fitness video, only the interactivity makes it more fun. Additionally, the interactivity sometimes senses things about your posture (“I’m sensing more weight toward the back; you’re probably sticking your rear out to far and should stand up more straight”) that a workout video would blindly allow you to keep doing incorrectly. As everyone says, it’s no substitute for a gym and/or personal trainer, but it’s a pretty good replacement for sitting on your ass and doing nothing physical ever in your life.

There are a number of different categories of exercise including things like yoga, strength training, and aerobic activities. The yoga is a little bit laughable because it’s primarily stand-upright poses and Plank-style poses (similar to pushups.) I doubt you could do a good wide-stance pose like Triangle on the board.

It includes a few games — some of which are fun, and some I don’t find to be fun at all. The skiing game requires a bit more hand (foot?) eye coordination than I have. I keep overcompensating when turning.

The jogging activity is… interesting. You run in place and try not to feel silly about it. That latter bit takes some getting used to. The Wii senses the running, and you get to view the scenery and other joggers on Wii-Fit-Island (or whatever the name is.) It’s a 3D space with footpaths and stuff and the various other Miis running around. I get the impression from the documentation that later on you can (literally) run around and collect Mario-like coins and powerups. While running, I spotted Darth Vader, Dwight Schrute, and Arioch, among others! And speaking of Miis, in the hula-hoop game, I had a very gay-acting Mr. T wiggling his pelvis and throwing hoola-hoops at me. Bizarre. If this were a dream, I’d have to stop to analyze that.

So my BMI is perfectly normal, in fact, it’s smack-dab in the middle of normal on the BMI scale, so I’m primarily “playing” Wii Fit to increase my strength and perhaps balance and hand-eye coordination. While I do yoga and a lot of walking, I don’t do much of anything aerobic these days.

The Balance Board is not legal for trade. Or so I’m told. Just in case you wanted to barter or something. 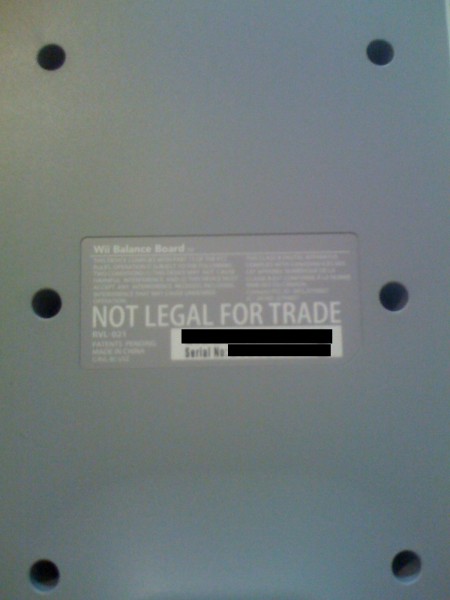 I do have to admit that certain activities remind me of the old Amiga Computer lore with their version of a balance board and the associated Guru Meditation Errors. I have to wonder if anyone will make a home-brew game with that in it.

One thought on “Balance Board”