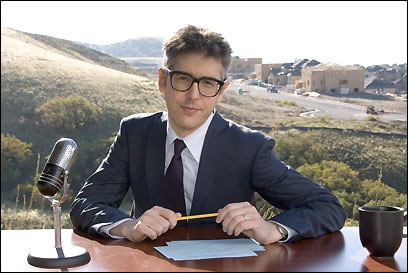 For fans of This American Life, it looks like they’ll be doing a live[*] simulcast taping of the show in May. They’ll be taping the show in New York and using fancy HD video cameras to simulcast it to a bunch of theaters around the country. Fortunately, Portland is one of the places they’re sending the stream to.

[*] It’s live only for the other three US timezones. In the Pacific timezone, it’s time-delayed by 3 hours so isn’t really live anymore.

Hopworks Urban Brewery (or The HUB) opened last week. I drive past it on my way home and opening night (Tuesday) was packed. Kim, Eric, Allison, and I swung by on Wednesday. There were the traditional opening-pains of long waits, slow service, and servers not quite knowing the menu very well but those are all expected and solvable with time and experience. I expect them to be non-issues in a few weeks to a month.

The place brews their own organic beer–beer of all varieties, which is nice. After ordering the sampler, I’m particularly fond of the 7-Grain Survival Stout and the HUB Lager. The greek salad was great, although a little heavy on the bell peppers (which I’m told actually have no place in a greek salad.) The others shared a pizza with tri-tip steak as one of the toppings. I’m told it was outstanding.

The HUB is set up to be organic and sustainable. They use their fryer oil to make biodiesel for the brew kettles and also use waste heat from the pizza ovens for brewing. The majority of their building was made from recovered materials. They use rain barrels to capture water for irrigation and the parking lot is designed to keep rain on-site, seeping into the ground instead of burdening the city sewer system. They are also geared (no pun intended) toward bicyclists. They have pumps and tools for you to use and you can also order parts at the bar. I don’t know if we’ll be bicycling there, as there’s a nasty steep hill between here and there (getting there will be easy, returning… not so much), but it’s about 5 minutes away by bus, so that’s nice.