I forgot to mention that last weekend, I received my cake! 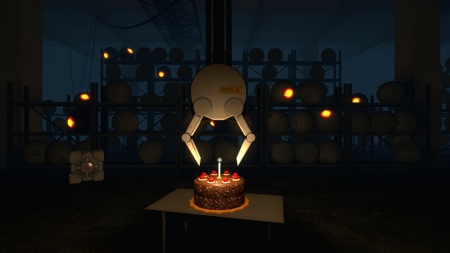 For those not in the know, it’s a reference to Portal, a most excellent game. The deadpan humor was outstanding. The general f’ed up-edness of the situations was very Brazil. The cake is a lie. The fact that it’s a first-person-shooter engine running the content of a puzzle game is unique in this age of shoot-em-ups. I really appreciate the fact that the only weapon I had access to could not (directly) kill things. Admittedly, it could open a wormhole under a heavy box and above a gun turret and indirectly cause ouchies.

“Please note, we have added a consequence for failure. Any contact with the chamber floor will result in an unsatisfactory mark on your official testing record, followed by death. Good luck.”

Between Portal and Bioshock, it’s starting to look like I’m turning into a gamer… although these were two games that stood up above the rest because of their themes, story, and content. I haven’t yet seen another game on the horizon that matches. (No, I’m not interested in Halo or Half-Life.) It’s probably back to Sudoku for me for a while.