First it was spinach, then pet food, and now tofu is being recalled because of poisons. It’s a good thing I have been a carnivore the past few days (MMMmmmmm…. Delta.)

Kim and I have been approved for a rather nice home loan. Woot, woot. We just need to find a house (looking in the Reed/Woodstock area) that works for both us and the loan.

In unrelated news, I find it ironic that former-Mtv-veejay Adam Curry’s company Podshow now has an internet TV “channel” called The Plus that is effectively what Mtv was back when they actually played videos and not reality shows (or whatever they’re playing now… I don’t know, I haven’t had cable in 8 years.) While the music in the videos (that I’ve seen) is not quite my style and the advertising is a bit heavy at times, I think it’s a pretty cool idea. Indie musicians plus amateur filmmakers equals something that is simultaneously disruptive to both the RIAA and MPAA. Anything that makes those guys shake in their boots is fine by me. I’m not so sure about it being 100% streaming, as it limits my ability to watch (1. AppleTV or Mac Mini hooked to the TV is a better viewing environment than a computer and 2. work is high-security enough that streaming is blocked, although iPods/iPhones are okay.)

Lastly… if a real-life business meeting was, instead, YouTube comments. 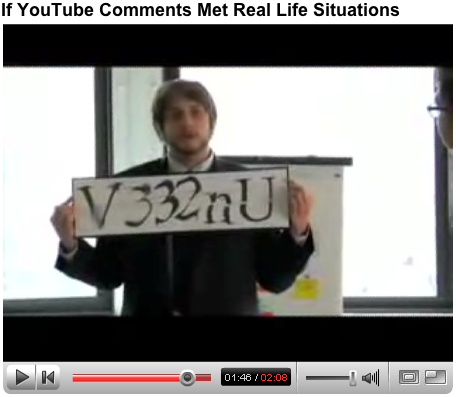