Yesterday, we took part in a pirate battle! A group in Washington has made reproductions of 18th-century sailing vessels and takes them up and down the west coast. One, the Lady Washington, which was the one we were on, was used in the first Pirates of the Caribbean movie. 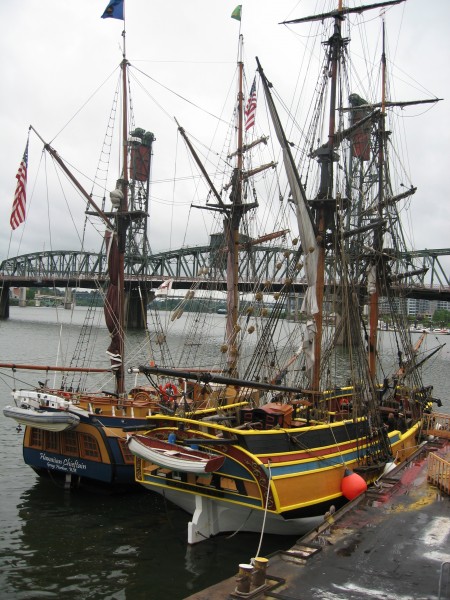 They used their diesel engines to get out of dock, past the Marquam (I-5) Bridge, and past the Celwood bridge, then switched to sails. The ships used real cannons, firing blanks, to simulate battle. Using the sails, they orchestrated a little dance, each trying to get in a good shot and be in a better offensive position. The two-ships-firing-cannons-broadside-into-each-other is a great movie visual, but the really damaging shots are when you can get a shot in at the back of a ship. That is where the captain and officers stay (with the nice glass windows and stuff) and is the least “armored” section.

At one point, the other ship got too close to the shore and had to resort to firing up the engines. Because of this, we won by default!

We had a few misfires due to damp barrels. The guy manning the cannons had some really cool steampunk-like safety goggles and a big box of black powder. I am not sure which of the two made him more cool. At one point, The Portland Spirit (the local “party boat”) passed between our pirate ships. It got fired at, of course.

Overall, it was a great adventure — fun and educational.

2 thoughts on “Pirates of the Willamette!”