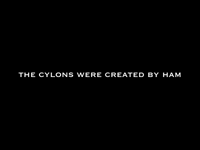 About a year ago, I started watching the first season and part of the second season of Battlestar Galactica. I thought it sucked. I could not really feel for any of the characters, the plot, and especially didn’t find the femmebot to be terribly great (in a “let’s exploit the nerd-virgins’ fantasies” sort of way.) Last week, Kim and I started watching it from the beginning (her, for the first time; me, as a second viewing.) I have to admit that it is starting to grow on me. She loves it. Maybe we will make it to the third season.

Kim had a set of foam earplugs downstairs. One of them disappeared. This evening, I found it on the floor of her closet upstairs. Someone picked it up, carried it upstairs, then kicked it around until it got lost under the closet door. Three guesses as to which cat whose name starts with an ‘E’ did this.

I am officially off of vodka tonics. It’s not the vodka, it’s the tonic. I used to drink them like crazy at clubs. I always used to feel crappy the next day. Of course, this was attributed to the vodka. Last week, I made myself a weak one (as an aside, we have been building up the bar and I have been studying the secrets of mixology.) Because it was a work-night, I continued with maybe two or three “virgin” vodka tonics — just tonic and lime. I felt equally crappy the next morning, and I know it was not the vodka, as it was some nice pure stuff and I had a shot or less of it (which I’ve handled just fine in martinis.) I can only conclude that it was the tonic. Aside from the occasional Ginger Ale on a plane flight, I don’t drink anything carbonated or sugary.