Yesterday ended up being an unexpected, yet welcome, adventure. My plan was to sit, perhaps with a hot-pad. This week’s yoga and massage sessions helped work out some nasty stuff in my shoulders, which was good, but left me feeling less than stellar. I sort of ended up blowing off an event I was supposed to go to (that would have featured plenty of walking) so that I could sit down at the Lucky Lab with Eric and refuel with a sandwich and beer. Yeah, yeah — technically I should have been having water after the bodywork. Liam and Stacy showed up. Brian C. appeared and disappeared. Julian joined in.

What should have been a relaxing afternoon with beer ended up being a pub-crawl and walking tour of SE. I’m not really complaining (although my body is, today) because it was quite fun and good to see those guys (and meet even more more of Julian’s Oklahoman friends.)

From there, we meandered to Produce Row. Along the way, there was a lot of graffiti about French bread: 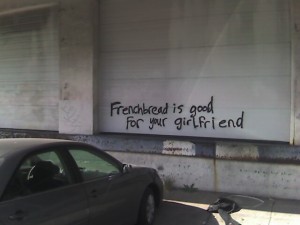 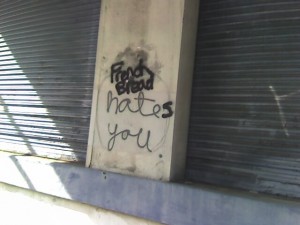 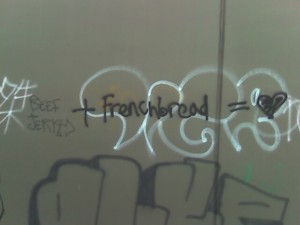 [Not much] more information is available at this Metblogs article. We continued into the Stand By Me segment of the afternoon, walking along the railroad tracks in the SE industrial area. While there, we were almost run over by an unattended train. 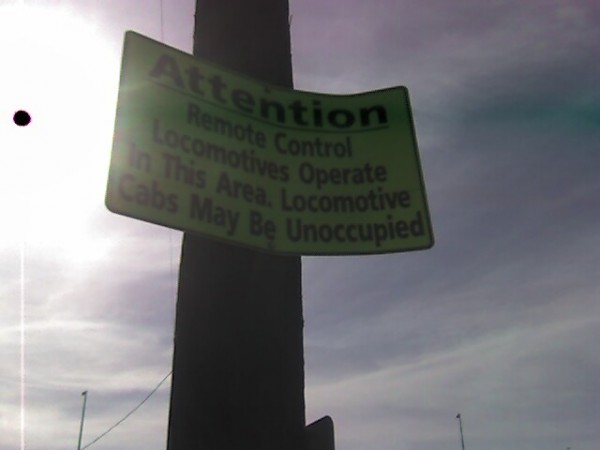 Please note that this is a slight exaggeration. The train was several hundred meters away, behind us, and extremely slow moving, when we heard the whistle. There was more than enough time to get out of the way, place coins on the track, and all that stuff. It was moving slowly enough as it passed that Liam, throwing caution and safety to the wind, jumped on one of the ladders on the side of a car, then jumped off a few meters later. I am not sure what he was doing, exactly, or why–maybe imitating a hobo. We escaped the trainyard unscathed (which could not be said about a particular nickel that got squished.)

Produce Row was great (I had never been there before), although we quickly wore down our welcome there, prompting an exodus to the B-Side. Plenty of time was spent at the B-Side, followed by a trip to the Doug Fir. In my book, the Doug Fir now officially sucks. It used to be a great place to get a greasy breakfast in the wee hours of the morning. Recently, that changed, negating what was in my opinion, the one redeeming factor of the place. Holman’s, though — a place I have walked past many times, but the thought never occurred to me to venture inside — has great breakfast food in the wee hours of the morning. French toast for me!

2 thoughts on “French Bread has a Posse”