Please note that all blog posts before 8 April 2007 were automatically imported from LiveJournal.  To see the comments and any LiveJournal-specific extras such as polls and user icons, please find the source posting at http://brianenigma.livejournal.com/2006/09/

So it turns out that Amazon launched their new Unbox service the other day. This is a video service that allows you to purchase or rent movies and television shows, online, as direct downloads from Amazon.
If you have a broadband connection.
If you’re running Windows XP.
If you live in the US.
If you install and only watch it on their special player software.
If you don’t intend to play it on a video iPod.
If you don’t want to watch it on your TV (unless you happen to have your Windows XP computer hooked up to your TV)
If you don’t want to watch it on your DVD player.
If you don’t want the extras or deleted scenes, subtitles, or foreign language dubbing.
If you watch the full rental within 24 hours of starting it.
If you only watch it on one computer and don’t transfer it to another.
If you agree that they can modify, suspend, or discontinue your ability to play the video at any time.

So, I mean–really? Who wouldn’t want to purchase or rent a video given those prerequisites? I figured I would check out their offerings. So, let’s see what they have. Classics, such as the old Star Trek Series. “Modern” films such as the original Matrix, Best in Show, and Swordfish. Oh, and here’s one I missed. I think I was sick the week it appeared in theaters. Big Momma’s House 2. Hey, it’s only $20. What a steal! Well, it would be a steal if you could steal it–but because customers are, a priori, considered thieves–I guess not. 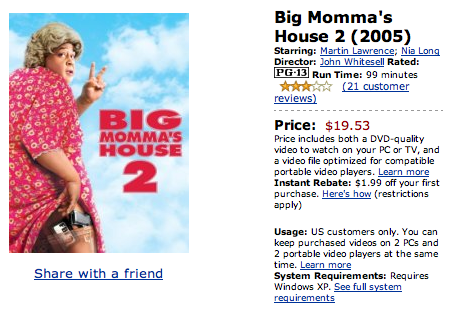 But wait! I think I had that fine film in my wishlist–or was that the wedding registry? Anyway, I think I saw the DVD’s price before, and something about this whole situation is nagging me. I go to check the DVD’s price as a basis for comparison. Hey! Only $15. Sweet! 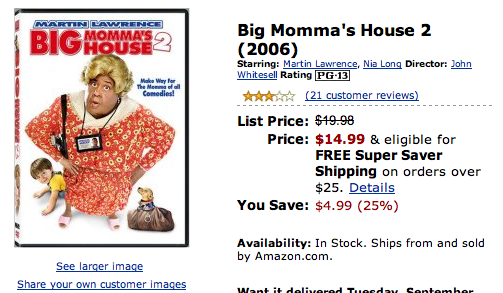 So I can pay $20 and get a copy of the film that I can’t play on my DVD player, I can’t play on my iPod, which can only be played on a Windows XP PC, and that has a “kill switch” such that Amazon can revoke my ability to watch it at any time.

Or I can pay $15 and get a copy of the film on a physical DVD, that can be played on my DVD player or any computer with a DVD drive, can be ripped to iPod format, and is mine now and forever (well, at least until the DVD player goes the way of Betamax)?

Can someone please explain the value proposition of this scenario to me?