“How I Spent My Summer Vacation”

Where to start? Yes, it was a great weekend! I got to (finally!) meet a lot of people that I had not previously seen before.

For any friends who have not yet had their ear talked off about Perplex City, here is the backstory and drama leading up to the event: there is a communications link between Earth and Perplex City (PXC) and it exists in London. Saturday was supposed to be a day of celebration–a second link was scheduled to be established, giving a little bit of redundancy. The link was set up to kick off after a certain number of puzzles were solved both online and offline–all very formal and purely ceremonial, as the people in PXC who designed the puzzles were still supposed to be reachable via the London link to provide help. A few days before the event, terrorists ::GASP:: named The Third Power (a.k.a. 3P–we’ve seen them before in the story) orchestrated an attack to bring down the London link, severing all connection to PXC. The San Francisco link had to be established by a given time or the carrier wave would collapse forever. The mood of the event went from what was effectively ceremonial torch-lighting to “save the world.” Okay. Got it?

After some tasty chicken and waffles with AlienDial, Crovax, Ouroboros, and his friend Steve (I had the chicken liver omelet with a waffle), we met up outside the Palace of Fine Arts. The picture shows a handful, but they wrapped around the building. There were about 350 in total. 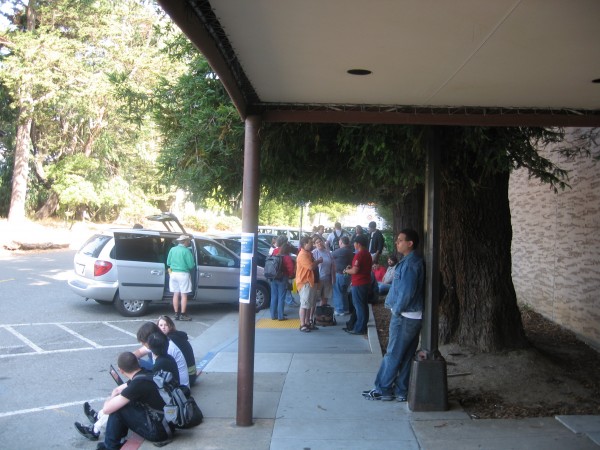 After entering, checking in at registration (and saying hi to lhall), everyone got to mingle around some video games and a “puzzle bar.” This was in the big lobby room, under The Big Board that would show our progress throughout the day. (No, I didn’t get a photo of The Big Board.) At the appointed time, we were brought into the theater where Adrian recapped the situation and explained how the day would work. 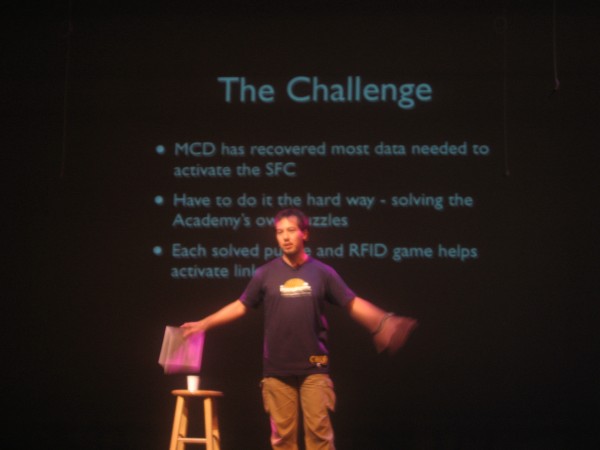 Everyone would break into teams (Cassandra, Nora, and I were a puzzle-solving machine!), then pick up a packet containing clues/questions/whatever. Your team would open the packet, answer the questions (which may or may not involve running across town), then return to provide answers and get another packet. Because it was a cooperative event and not competitive, everyone got to collaborate on the difficult puzzles. If you came back with an unanswered question, not only would nobody make fun of you, but everyone would team up to help defeat the unsolved puzzle. For instance, that happened with GuiN’s team. Their series of puzzles led to a book at the library with a note in it that led to another book, with a Rubik’s cube hidden behind it. They got the cube mostly solved, but could not quite get the last face. When bringing it back, some sort of Rubik’s Cube master solved it in 30 seconds without hardly looking at it: 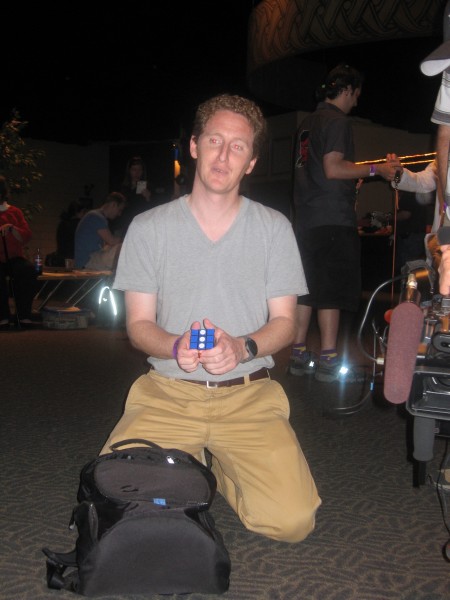 A whole gang of us then puzzled over the numbers written on the faces for about an hour. After many false answers, the powers that be peeked in and discovered that one of the stickers was rotated (what we thought was a “1” was really a “-“). From that point, everything was obvious (well, mostly.) The numbers translated to a phone number. The message at the number said “what is the sum of the numbers blahblahblah.” After repeated listenings, it was “what is the sum of the numbers on the yellow face.” 88. Problem solved. Collaboration at it’s best.

So anyway, back to our team. We started with a sheet themed with Ghirardelli Square. 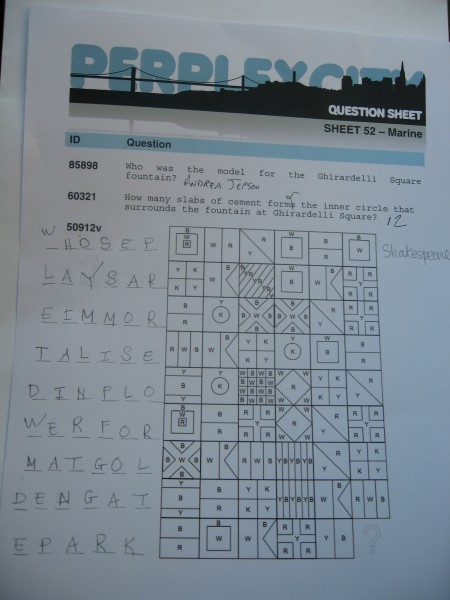 Because Nora lives in the city and rented a car, we got there pretty fast. Cassandra and I hopped out and proceeded to the fountain as Nora parked and met up with us. The first couple of questions were answered fairly quickly. The last, involving signal flags, took a bit longer. Between the shapes and CMYK color letters, we knew they were nautical flags, just not what they decoded to. Some guesswork and some Googling (GSM cellphone + Bluetooth + Laptop + Google == yeay!) got it decoded into another question, then Nora’s knowledge of the city knocked it down pretty quickly.

Upon returning for another packet, it turned out that all of the other travel packets had been handed out. The one remaining packet was a maze. Maze. Simple, right? This one was 5 sheets of paper by 5 sheets of paper. 25 in total. The task was to assemble the maze, then complete a path through it, taking letters from the path. It felt overwhelming at first, but turned out to be easier than it looked. Because all of the letters were oriented the same direction, we knew each piece’s orientation. This put the corners and edges in the right place and the rest was matching up maze edges. Cassandra totally rocked out on the maze assembly. I uhhh… supervised and made motions like I was helping.

The message itself was more difficult. Bystanders thought it would be easy because it had to spell out English text, right? Well, the first few letters were CLAESOLDENBURGANDCOOSJEVANBRUGGEN. Yeah, good luck on that English language thing. Nora saves the day, recognizing them as sculptors. The rest fell together pretty well.

Cassandra and Nora were great teammates–smart, fun, and serious, but not crazy-serious. I would totally love to have them on any team in the future.

When everyone’s puzzles were completed, we all gathered back in the theater. Adrian’s team got the link re-established and Sente (the head of the Academy in PXC–the main dude we deal with over there.) As the fuzzy connection got more clear, Sente started to explain the situation. The 3P simultaneously sabotaged the connection to Earth and opened some sort of wormhole, transporting something from PXC to Earth, causing a massive power outage over there.

At about this point, one of the coolest things I have seen in a very, very long time happened. Everyone in the audience had their cellphone ring simultaneously. It was a cacophony of ringtones. It turned out to be a threat from the 3P. Following the message, everyone jumped out of their seats and headed for the exits. 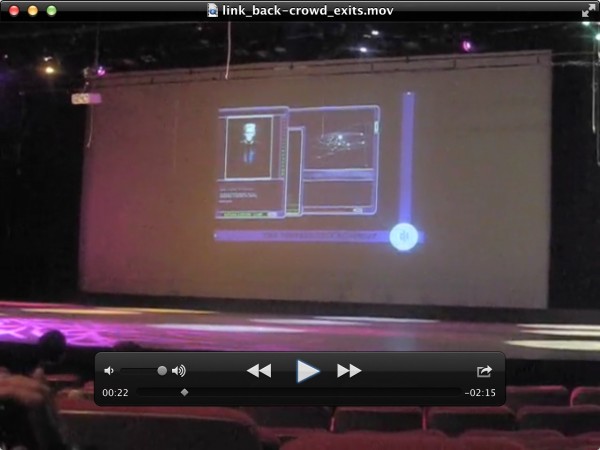 We were greeted by two helicopters performing multiple very low altitude flybys, then raced around the building (pardon the unsteady-cam) to see them fly over a few more times. 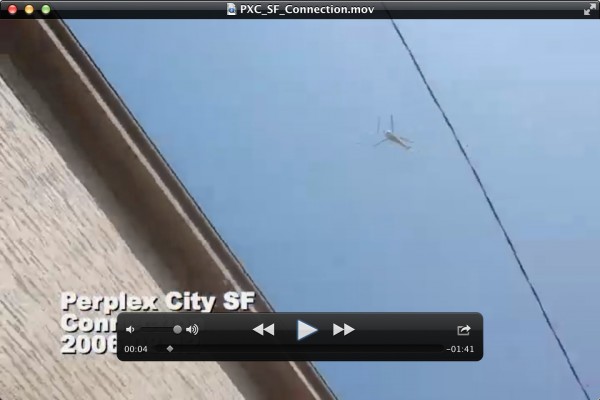 Finally, everyone was given one final phone call, threatening us to keep away from The Cube, before the helicopters departed and left us standing there speechless.

It turns out that now we are not only searching for The Cube (a priceless artifact of great power that fell here from Perplex City), but the 3P are now racing us to find it.

The evening was to be concluded by a gathering at a local bar. We thought we had plenty of time (because of a slight misunderstanding with the meetup time), so we got some food at a wonderful little tea house and did a little tourism. This included watching a fox taunt a bison. I’m including it here for general coolness value and not because it had any real bearing on events of the day. 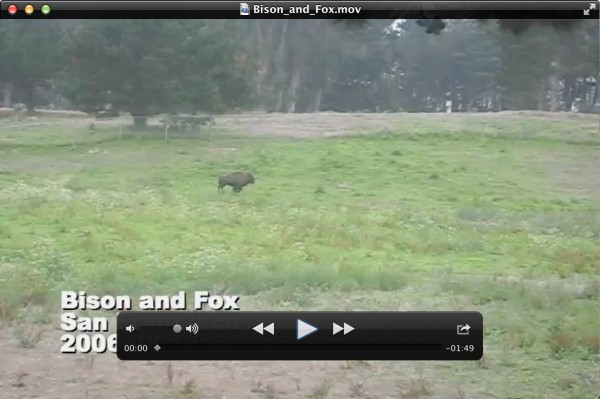 I think the weekend was a great success. There are a few qualifications to that, though. Admittedly, for Mind Candy, this was the first event that they put together from 5,000 miles and 8 timezones away, so a few minor flaws were to be expected. In my humble opinion, a few things could have been improved upon:

My photos and videos, as always, are at Flickr and a whole slew of photos can be found under the Flickr tag of pxcsfconnection.

In my next post, I hope to talk a bit more about the pre-game and post-game happenings at Endgame.

One thought on “How I Spent My Summer Vacation”