Please note that all blog posts before 8 April 2007 were automatically imported from LiveJournal.  To see the comments and any LiveJournal-specific extras such as polls and user icons, please find the source posting at http://brianenigma.livejournal.com/2006/05/

Kim and I took a road trip to Eugene for the weekend. It’s a pretty college town and (around this time of year) very much feels like Santa Cruz, but without the beach. We stayed with Karen and James, some friends of Kim’s from back in the day. I had met James before; he is a weekend jazz DJ at the U of O college station down there. He is a great cook and fun to be around. I guess in previous years he grew tobacco, but this year he is growing tea. Mental note: something to research and try. I had no idea the climate was appropriate for tea. Karen is equally fun, and although we just met and I do not know what she is like regularly, it seems like being around Kim really unleashed her.

Over the course of the weekend, I ate at a vegan Thai food place that follows Dao rules and does not even use onion or garlic, as the overwhelming smell/taste render your spirit unrecognizable to the gods. I have no idea how they pulled it off, but I had some great “shrimp” and “fish” that tasted awesome. Bonus: no shrimp tails. We saw Aziza dance in the evening. She was amazing and did some crazy slide maneuvers, some almost-breakdancing pop-n-lock stuff, and dancing while balancing a glass of water (stolen from a table in the audience) on her head.

Today, while the womenfolk went to dance workshops with Aziza, us menfolk feasted on venison. This afternoon, before coming home, we went to a favorite bar of Kim’s to have pear cider. Unfortunately they were out, but the marionberry mead was excellent, as was the band that was practicing in the back patio–generally Irish and Scottish music with a couple of fiddles, a banjo, a mandolin, a squeezebox, and a drum.

All-in-all, it was a mighty fun weekend. I think we have another road trip (in another direction) in the works for next weekend.

And now, photobloggery from the past week to catch up on: 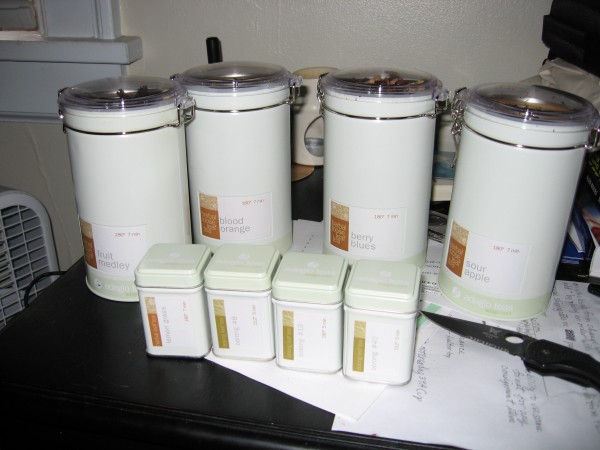 A new order of Adagio Tea arrived for summertime, including Fruit Medley, Blood Orange, Berry Blues, Sour Apple, Lemon Grass, and Oolong #8, #18, and #40. The Oolong #40 is very close to what they serve at Shin Sen Gumi, which is the first place I have had Oolong, iced or otherwise. Every time I drink some, it brings back great memories of great ramen. 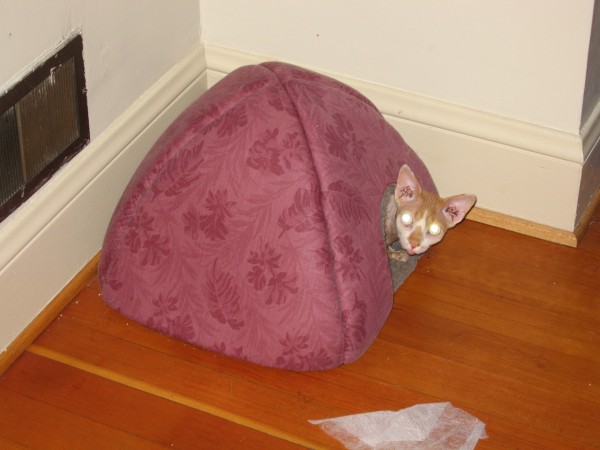 I do not have a cat. I have a turtle. I have no idea how he can stand being in there in 90 degree weather or how he can stand running around the house. I guess when you’re naked, it must feel good to have the air temperature come close to your internal body temperature. 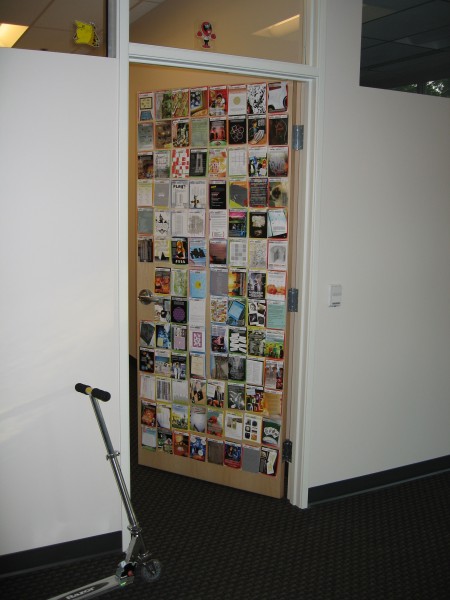 The outside of my office at the new building. Pictures of the inside of the room later, when I get things properly adjusted (it is about the same number of square feet as the previous one, but shaped much longer and narrower.) Those Perplex City cards sure do grab a lot of attention. People in other parts of the company (sales, etc.) sometimes bring people over to get stumped on the cards just so they can show how smart our engineering team is. 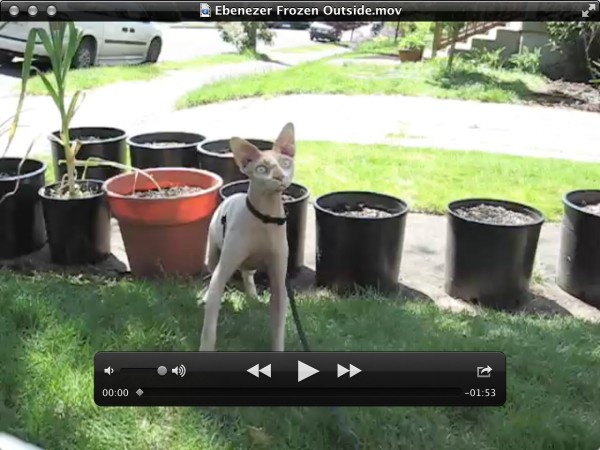 Sometimes when Ebenezer goes outside, he is a spring-loaded cat on a string. Sometimes he just freezes and stares at things. I think it is just a giant sensory overload to him–too much stuff going on. Sometimes this lasts for 5 minutes. In this case, I managed to capture two minutes on video. If you want to watch two minutes of a nearly motionless cat (more fun than watching paint dry!), click the link.