Please note that all blog posts before 8 April 2007 were automatically imported from LiveJournal.  To see the comments and any LiveJournal-specific extras such as polls and user icons, please find the source posting at http://brianenigma.livejournal.com/2006/03/

Friday I went to the Gotham Tavern with Kim and her coworkers. It was a big sendoff party for her and Mary. Everyone there was awesome and fun and very supportive of Kim’s move to full-time self employment and Mary’s move to Seattle. Ordinarily, I would say that Red had entirely too much to drink, but in the couple of times I have met him where no alcohol was involved, he was equally as boisterous and crazy. Mary’s girlfriend reminded me a lot of Liam’s girlfriend. Hey Stacy, you don’t happen to have a sister or cousin moving to Seattle, do you? The night (for me) ended with everyone driving home and walking to the Goodfoot because we all live a few blocks away in various directions. I ended up just crashing once home, but Kim went out for dancing.

So, the Gotham Tavern. It looks like it wants to be hipster, but from the clientele, hasn’t quite completely captured hipsterness yet. The menu has a “Malternative” section complete with Mickey’s Grenades and Mad Dog 20/20 (red or orange.) It also offers bargain deals like Toad in a Hole (a favorite breakfast treat of mine consisting of not much more than toast with a fried egg in it and bacon) for the paltry sum of $10! The bacon was fancy (really thick cuts of pork something-or-other), but not $10-fancy. As the evening wore on, a middle-aged lady set up some DJ equipment and starting spinning records. I was trying to figure out why she looked familiar and only later came to the conclusion that she bore a striking resemblance to Stiffler’s Mom. She spun “great” 80’s hits at an entirely too loud volume like “Supersonic” (the S is for super, the U is for unique…), some old Art of Noise, L.L. Cool J., and the like. Escaping to the quiet of the restroom, I discovered about seven cuckoo clocks (not all pictured), all set to different times, all set to do something on the quarter-hour. Your odds of having at least one of these clocks chirp at you in the bathroom increases with each minute you spend in there. 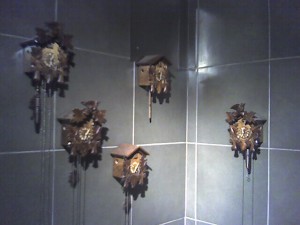 In totally unrelated news, the first episode of Ctrl+Alt+Chicken is out. For those not in the know, this is the long awaited cooking show starring Alex Albrecht (he was on Tech TV and is currently on the Diggnation podcast.) It is basically a cooking show for geeks starring people who don’t really know how to cook. This premiere episode is about Chicken Cordon Bleu. It includes great tips like “Chardonnay tastes like barf, so you don’t want to have it with your meal,” “I’ve never fried anything before and you know what that spells: B-U-R-N,” and “this is where we screwed up in pre-production because this should have only been in the freezer an hour and we put this in yesterday so now it’s rock solid.” It also teaches us that Chicken Cordon Bleu is not actually blue and that monkeys turn red when you cook them.

In other unrelated news, Pith Helmet (no, I do not have a lithp) is turning out to be a heck of a lot better than Privoxy. Privoxy is written in Perl, so can be a bit unwieldy at times. It also does scanning and (possible) modification of images, so takes time between downloading them from the internet and passing them along to the browser. Pith Helmet has the same sort of functionality, but is a native plugin for Safari, so operates much, much faster. Also, like the Firefox Adblock plugin, you can right-click on images and iframes to instantly create a block rule for them. Privoxy requires you to edit a config file (either directly or through their web interface, but either way you have to interrupt your flow to do so.) On the other hand, Pith Helmet is not free or Open Source, but it is very much worth the $10 nagware registration fee.