Please note that all blog posts before 8 April 2007 were automatically imported from LiveJournal.  To see the comments and any LiveJournal-specific extras such as polls and user icons, please find the source posting at http://brianenigma.livejournal.com/2006/02/

I am not sure why, but I have been in a really good mood for the past three or four days, with a big smile on my face.

Tonight, I discovered the Palast Orechester & Max Raabe and they are my absolute newest favorite band. This is a German group (how much of a dork do I end up coming off as if I say that I have a hard time not saying Max Planck instead of max Raabe???) that does the old-school Jazz thing. They have a good mix of their own stuff as well as covers. The covers sold me. Really, the band is all brass, clarinet, and drums. Max has that old 20’s voice that is kind of high, a little warbly, slightly nasally, rolls his R’s, and instead of directly hitting notes, sort of slides around the scale to hit the right note–it makes me feel like I am listening to big band music on an old burlesque theater. Seriously, it sounds like I hit a time warp and am listening to an old photograph, except half the music covers modern things. I’m pretty certain the whole Mambo #5 with everyone piling in the car to get gin and juice was not exactly the height of social events in the early twentieth century. Anyway, thanks to the Russians and their copyright laws (or lack thereof), I now have his two cover albums for slightly more than a dollar each (as opposed to the Amazon.com.de price of a metric fuckload of Euros plus shipping and handling.) So yes, I like the band and intend to buy some of their CDs and DVDs, even though they are German.

So, tonight consisted of a lot of things. Maybe I can recount them here:
* Tiny’s had a a First Friday art opening thing. The curator was pretty cool, as were a number of people. The I-Like-Yeman girl (Elane?) was a but too stuck in the whole thing that women have power there. No. No, everything you described was oppression, nothing more and nothing less. Maybe to you, it is “freedom” to go there and have everyone wait on you hand and foot, but you are allowed to return to America.
* Then there was Eric’s band at Imbibe. That was really good music. Regina was there dancing (her boyfriend was the one wearing Mariachi Pants two Thanksgivings ago), and I tipped her a dollar, but had to give it to her after her set. The whole dollar in the bellydance coin belt thing is a still a bit too overwhelming for me, sorry. It’s too objectifying or maybe too much like the one or two times I found myself at a “gentleman’s club.” I’m still not really comfortable putting a dollar in the skimpy clothing of someone I will probably see again. It’s me, it’s not you.
* Everyone at the art opening then went to Goodfoot. There were a lot of people at Goodfoot. It was quite packed. I do believe frottage was the word of the night (not me being the source, but the receiver, or maybe I was just overly sensitive to people touching/groping me as they passed by–the room was packed.) Anyway, did I mention that there were a lot of people there? There were a whole lot of people there. Some of those people were breakdancing. I had a gin and tonic as an homage to Yemen girl. Brian C. gave me a fez from Istanbul (not Constantinople) as well as the cellphone I loaned him a while back. Anyway, a fun night. Some random guy made a bit of a quote from Steve Martin’s The Jerk as I walked home (as Brian C. yelled out his car window, about whether I needed a ride home.) No, No. It is only a block. 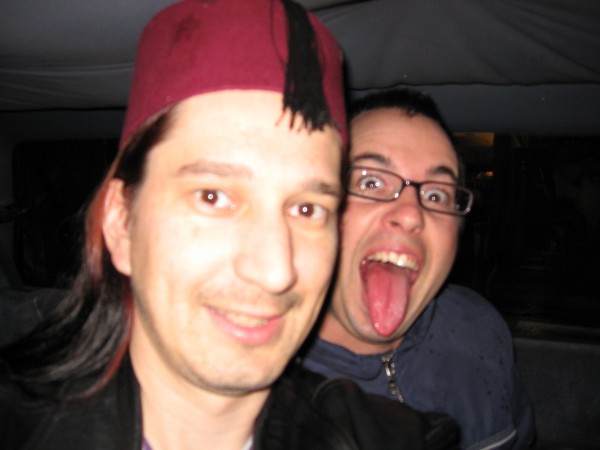