Please note that all blog posts before 8 April 2007 were automatically imported from LiveJournal.  To see the comments and any LiveJournal-specific extras such as polls and user icons, please find the source posting at http://brianenigma.livejournal.com/2004/08/

Today’s post will include a few pictures, but first the things for which there are no pictures. A few nights ago, Eric and I went to the Horse Brass Pub, which was an excellent environment and had some good beers on cask. Today, Feedle and I went up to Washington in order to go to the nearest Del Taco. It was just as bad as I remember, but in a good way. The Veggie Works Burrito was great. The Chicken Taco Del Carbon was really trying to be an authentic Mexican taco, but failed in most ways.

Yesterday was home improvement day. I picked up an end table with a drawer that can be used to hide the big mess of cords that typically surround my laptop (power, iPod, organizer, etc). I also picked up a number of framed prints, most generally involving cats. For instance, there was a set of prints that included Du Chat Noir and such. Another is a minimalist Japanese print of a pond with catfish and lilly pads with a black cat on the edge of the pond. One print with no cat connections at all is Ophelia. Yes, they are all pretty common, generic, over-used, mass-produced prints–but I rather like them and thought they looked better than bare walls. Yes, I understand they are all very different styles–but each style goes in a separate room, so there are no major clashes. Another thing I managed on home improvement day is that every box, save two containing computer cables and devices, is unpacked. It actually looks like someone lives here now, instead of someone having just moved in. I am still trying to figure out what to do about the sofa. For now, I have a fold out 3-person camp sofa thing that will work for now. Plus, once I get a real sofa, the fold-out one will work quite well out in the back patio.

Also: today I caved in and got one of the trendy Nalgene bottles that everyone up here seems to have. Mine, though, is specifically made by Nalgene for Powell’s: 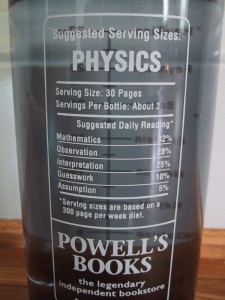 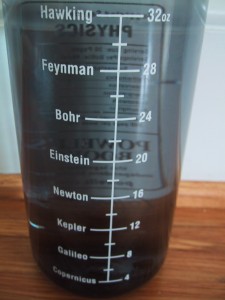 A picture that I took weeks ago, but never managed to post follows. It may be difficult to make out what it is an image of, so let me describe it. You know, how often times you can look up in a residential neighborhood and see a pair of shoes, with the laces tied together, dangling over the phone lines? Well, I looked up and noticed a two-piece phone dangling over the phone line. 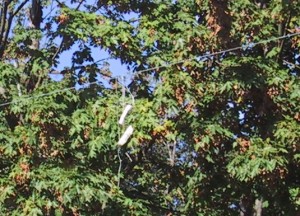 Another thing I noticed while walking around town was “get your creepy Baptist paws off my marriage” written on the sidewalk in chalk, about a block from a big gaudy Baptist church architected to look like a castle.

Finally, we have a picture of vegemitelover being molested by Ebenezer: 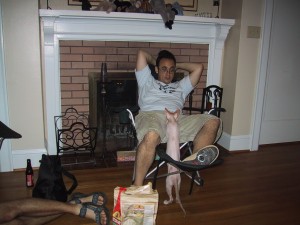