Please note that all blog posts before 8 April 2007 were automatically imported from LiveJournal.  To see the comments and any LiveJournal-specific extras such as polls and user icons, please find the source posting at http://brianenigma.livejournal.com/2004/07/

1) I have moved! I am officially in the new place. Admittedly, there is still some stuff at the old place and I have to spend this upcoming weekend vacuuming, shampooing, and performing other housecleaning duties. The new place is GINORMOUS! And that is not even counting the basement. The cats finally got used to the new place, but it was a little weird at first. They would not leave the master bedroom (the place I penned them up for a bit just to get used to the new locale.) When released, they stayed up there, being very skittish when venturing far from it…but it was hot. It was really hot. I have never before seen The Precious pant like a dog without first being spun round in circles by chasing a laser pointer. This time, she was panting because of the heat of the room, not because of the heat of exercise. Anyway, they are fine now–there was just a bit of nervousness from them initially. 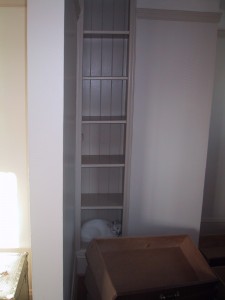 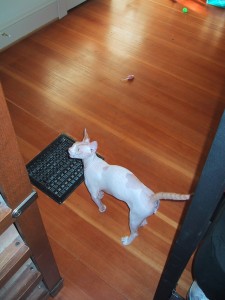 The Precious cowering and shaking, Ebenezer starting to get used to the place

2) I am still waiting for my phone and DSL to be hooked up. I got the DSL modem in the mail today. Now I have three of them from various residences and service changes over the past several years (the house in Costa Mesa switched from one kind to another while I was there). ’till then, I am doing the cybercafé thing for work.

3) I should have a new job pretty soon. I have until end-of-day tomorrow (Wednesday) to give a yeay-or-neigh to the one offer I have. I should find out tomorrow morning if I get the other job (the embedded programming job that I really, really, really want.)

4) New license plates. Technically, there should be a space between the “M” and the dash. I put that in my application, but I am not sure if someone mistyped it or if the computer rejected the extra space. Tomorrow, I call to find out.

5) What was really depressing yesterday was “coming home” (to the old, nearly empty, house) and not hearing the scampering of little feet hopping off the bed and racing down the stairs to meet me. I almost shed a tear because it no longer felt like home without kittens to greet me.

6) I came this close —><— to being pulled over today. On the freeway, in the “construction zone: fines are doubled” section of the 5 where they are widening it and everyone ignores the reduced speed limit signs, I was in a whole pack of cars that was speeding. There was a motorcycle cop with a radar gun that followed and pulled over the guy immediately behind me. Did I mention that everyone was going the same speed (~10 MPH over the posted construction zone speed limit), so it was just a big lottery that any one car was picked as a ticket candidate?

7) I have walked by the cemetery near the new house several times now. Every time I do, I feel like I am walking through one in Sunnydale and that any minute vampires will pop out of the ground. It has some really nice headstones and tombs. It also has a cat that I have seen a couple of times. I think one of the most creepy things about it is that the cemetery is perfectly level while the surrounding streets are hilly. This means that one side of the place is more-or-less flush with ground level, but the other side has enough of a height difference between “ground level” and the sidewalk that I am probably eye-to-eye with corpses. Also, there is some pretty cool chalk graffiti around it, including “Does anything really die?” and something-or-other about watching out for zombies.