Please note that all blog posts before 8 April 2007 were automatically imported from LiveJournal.  To see the comments and any LiveJournal-specific extras such as polls and user icons, please find the source posting at http://brianenigma.livejournal.com/2004/06/

Dinner tonight was at the Kalga Kafe — a very fine place for vegetarian and vegan food. Plus, they are open until midnight, which has to be good for something. Anyway, I had some nice stir fry with basmati rice.

Upon returning home, I discovered that my firewall was dead, dead, dead, dead, dead. It has been acting sort of funky the last few days, but seems to be non-recoverable now. I think there is a fatal problem with the RAID. After running to CompUSA to discover that they closed 5 minutes before I got there, I returned home and decided to use the AirPort hub as a gateway. I know millions of people do this, but it does not quite seem right to me. The idea of putting the wireless hub directly on the public internet seems a bit scary. Yes, it does have a firewall, DHCP, and port forwarding built in, but I have always been used to a DMZ with zero or more machines in the zone as well as a dedicated firewall-only-device to shield the LAN. This whole multi-function thing freaks me out a bit.

I read about an interesting feat of paper engineering the other day and finally got to try it out tonight. Basically it is a way of creating interlocking “chain links” from a single solid piece of paper without any breaks, joins, glue, tape, tab-A/slot-B or any other trickery. Using only a single sheet of paper and an X-Acto knife (and three failed attempts), I was able to construct two keys on a keychain: 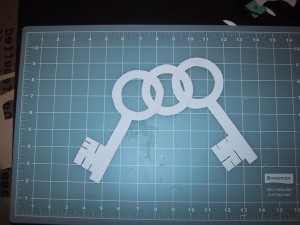 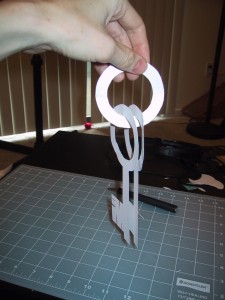 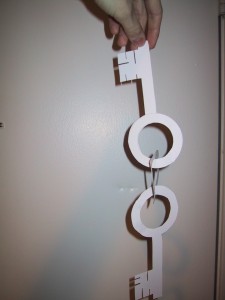 How is this all possible? Well, there is a tiny trick to it. For instance, I am not sure I could do it with standard 20 lb paper. The “keys” shown in the pictures above were made using slightly thicker 67 lb paper. Anyway, in the process, I learned a lot about Illustrator, my new printer, and ended up with a template I can print directly on the thick paper.

Tonight I think I put 2 and 2 together and ended up freaking myself out. You see, I have a weird sound that sometimes occurs somewhere in or near the house. Once or twice a day, for (at least) the last few months, I hear something that sounds a bit like a toy train whistle. Years and years ago my family had this big square wooden thing, about the size of a large cigar. It had four whistles carved into it and made a sound sort of like a train whistle when it was blown into. The sound in the house seemed much like that–two or more deep whistle tones combined together. This has been going on for months, and I could not figure out what it was. For a while, I kept thinking it was the wind on some pipe–for instance, the fan over the oven, the fan in the bathroom or laundry room. None of these seemed to pan out because it never really coincided with the wind. Also, while I could not pinpoint the exact position (either inside or outside the house–it was hard to tell), I did hear it while I was standing in a number of different places in the house over time and simple triangulation showed it was NOT coming from any of those likely places.

So, on the way home this evening, I remembered something. I really do have something in the house that makes a train whistle sound, which is in about the right place to be the hard-to-pinpoint source of the noise. It was a paper project I made last year: 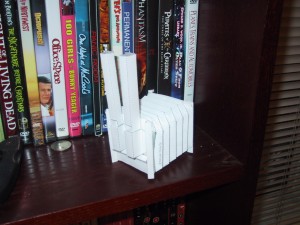 So, mystery solved, right? Well…there is just this one little thing that keeps nagging me… For the life of me, I cannot figure out any way that it could make noise all by itself. I have been through a number of different scenarios: wind blowing past it, pressure and/or heat differences between its insides and outsides, elasticity of the accordion-like mechanism, etc. None of them would cause it to make a noise!

So now, I have freaked myself out and have it flattened, whistle-down against the shelf, held shut with alligator clips. I am not sure if I would be more freaked out if I kept hearing the whistle or if I stopped hearing it altogether.

I have been listening to nothing but PIL all day. I think I need more than just the two albums.