Please note that all blog posts before 8 April 2007 were automatically imported from LiveJournal.  To see the comments and any LiveJournal-specific extras such as polls and user icons, please find the source posting at http://brianenigma.livejournal.com/2004/06/

The nifty thing about working from home is that you can burn incense whenever you want. The not-so-nifty thing is that there is no air conditioning when things get hot late in the day. Caffeinated hot sauce for lunch can help with that late-Friday brain drain that kicks in, when you still have a bunch of stuff to do.

Somebody named Freeland has a song called “We Want Your Soul.” Normally, I am not a huge fan of techno, except for some of the more mainstream stuff from select artists. Sometimes, it helps with programming to have mindless techno playing in the background. Anyway, this “We Want Your Soul” song is pretty good. It reminds me a lot of Radiohead's “Fitter Happier.” In fact the acapella version of this song is about the same as “Fitter Happier,” only with a female-ish voice and three times as long. The only problem is that there seem to be a lot of crappy remixes out there, and I cannot find the specific version that I heard on Liquid Gothic.

I may have to finish off the workday from the patio. It is 90˚F inside, but only 80 degrees outside and my fan is broken. Wait! I have a better idea! I want to go to an ice cream shop and lay down in the glass case like a cryogenic sarcophagus.

I got Ebenezer a new little bed/igloo/tent thing. On days unlike today he likes to spend most of the day under the blankets in the bed. I figured this might be a little better than him sweating all over my sheets. (He minds being too cold, but does not mind being too hot, and consequently spends a lot of time sweating.) 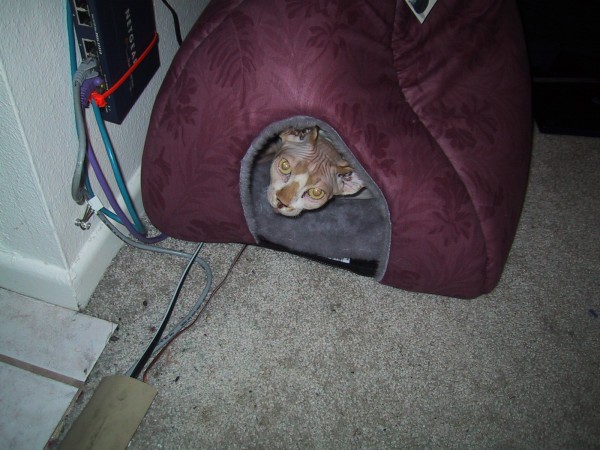