The House of Sand and Fog is a really good, extremely powerful film and rather messed up in a number of ways. Ben Kingsley is excellent. The beautiful Jennifer Connelly plays her character quite well (yes, I have had a crush on her and her front teeth since Labyrinth). Can someone explain the deal with her in movies, at the end of short wooden piers? Is this becoming her trademark or something? At the very least, I can name this scene appearing in The House of Sand and Fog, Requiem for a Dream, Dark City, and probably others I cannot think of right now, too.

“Unbreakable:” I watched this film yesterday–for the first time, I might add. Mister Sixth Sense does a good job of telling this story. He also did a much better job at masking the twist ending (at least, to me) than he did in 6th sense. With the one movie (“I see dead people”), I could tell toward the beginning how it was going to end, I somehow didn't realize how Unbreakable would end until about 10-20 minutes before it happened. I am not sure I will watch it again or buy the DVD, but it was fun.

“Dickie Roberts: Former Child Star:” I liked David Spade when he was on Saturday Night Live. I even liked his biting sarcasm on those 10-10-321 (or whatever) commercials back in the day. I saw this movie a few days ago. On the one had, Dickie Roberts was not the slapstick assholery of his more recent stuff (well…actually I am not sure I have seen him in anything since Chris Farley died, so I am not sure how recent his recent stuff actually is). On the other hand, it is not MUCH of a step up from the slapstick assholery. I did really enjoy the bit parts from the other child stars (Screetch, Eddie Munster, the Bradys, etc). The “We Are The World” style song during the closing credits was fun and unexpected. This is one movie I am NOT going to watch again, though.

The Vaja iPod case: this thing is great. My old iPod case ended up tearing. While it worked great as a shock absorber, constantly removing and inserting it in the case (because it does not fit in the dock while encased) eventually ripped the silicone. The new case allows the iPod to be pulled from the case much easier, offers better screen protection, and includes a nifty belt clip. While the belt clip CAN be detached from the case, it only detaches at a strange angle, so it does not accidentally pop off. Smart design move!

PulpFiction: this is a new RSS news feed reader, much like NewNewsWire. The cool think about this is that it works a bit more like an email client–news articles are kept around on your hard drive, instead of scrolling off into the ether. You can say “hey, I read this really nifty article on crypto about three weeks ago….but which website was it?” With PulpFiction, you can search for it. With NetNewsWire, you're stuck Googling for that article because it scrolled off. The PulpFiction filters are awesome. Their automatic “Filterizer” is not quite straightforward at first, but becomes clear once you have played with it a bit. Their hotkeys are excellent. Their customization is wonderful (heck, I even wrote my own display theme based on my LJ style, which should be on their site pretty soon).

Alias season 3, Buffy season 6, Buffy season 7, Angel season 4: I am still in the process of downloading and/or transcoding/burning these. I will let you know.

Since when did Marilyn Manson and the Foo Fighters cover “Down in the Park???”

I finally got pictures of Ebenezer up at the top of the bed: 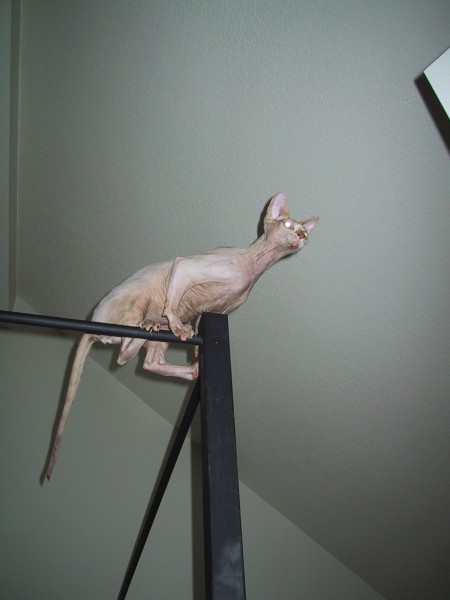 I believe the grease/dust spots along the supporting pole indicate how he climbed up there.