Please note that all blog posts before 8 April 2007 were automatically imported from LiveJournal.  To see the comments and any LiveJournal-specific extras such as polls and user icons, please find the source posting at http://brianenigma.livejournal.com/2004/03/

There is a green onion in my RTF book. It is sticking out of the top and side, sort of like a badly placed bookmark. Wait. Let me rewind.

This weekend, as well as the previous one, I have been Mister Housekeeping. The giant rats nest of cables in the steamer trunk in the closet? Now in very nicely stacked plastic Tupperware-like drawers, clearly labeled with things like: power cables, data cables, audio cables, consumer device/misc cables etc. The steamer trunk now houses old clothing that was in cardboard boxes at the top of the closet, and doubles as a nice little table (complete with a tablecloth-like thing). The plastic kitchen trashcan is now a glass recycling bin hidden in the pantry. AND the kitchen now houses a nice shiny, new, metal trash can with wah-wah pedal and flip-top lid. The flip-top lid is important because the trash can is right next to the low kitchen window and many an object has been pinched from the refuse by deviant kitties. 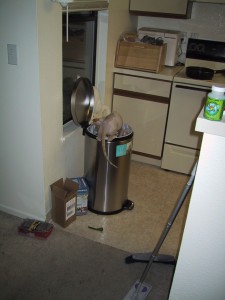 So, this evening, I was making a veggie pot pie (one of the main ingredients being parsnips-a-plenty), and in the process of cleaning, chopping, dicing, and otherwise mangling vegetables, I kept the lid open. It is easier to launch a bell pepper’s stem across the kitchen for a 3-point shot than it is to walk over and hit the wah-wah pedal. Keeping the lid open, of course, sort of defeats the purpose of keeping the lid closed to prevent kitty pilfering. Consequently, I ended up with the ends of green onions everywhere. …and I mean EVERYWHERE. I also ended up with the green leafy bits at the base of cauliflower heads in various interesting places. The lid was quickly closed after all the veggie preparation was complete. 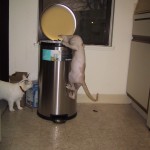 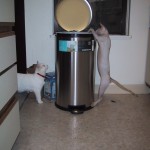 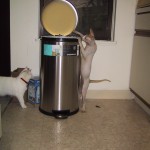