Please note that all blog posts before 8 April 2007 were automatically imported from LiveJournal.  To see the comments and any LiveJournal-specific extras such as polls and user icons, please find the source posting at http://brianenigma.livejournal.com/2004/02/

When you have an amateur radio license (and sometimes, even if you don't), you get to recognize certain antennas by their size, shape, placement, height, and other attributes. On the freeway yesterday, I saw what was basically a minimalist cellphone tower disguised as a cross. It looked like it was not originally intended to look like that, but that the cross-piece was added afterward.

There are entirely too many motorcycle dealerships up in the Portland area. While the weather is not horribly rainy, you get just enough of that first-rain sort of slippery slick across the ground (something you don't really notice in cars, but makes motorcycle riding a little more sensitive) and the weather is cold enough that I would think motorcycle riding to be generally impractical. There are a number of Harley dealerships up here. Speaking of impractical, there is also some other (Yamaha?) dealership with their showroom up on a glass-walled second floor, and I think some other business on the first floor. That just doesn't seem right.

I drove past several three-story tall light-up signs, yellow with black text. They proclaim “Adult Entertainment” in a million-point font and “Movies Arcade” just under that in a smaller, thousand-point font. All of the signs were at truck stops.

There is a Family Fun Center with miniature golf and Bullwinkle's not too far away.

I went to look and learn, but came home with a new friend… 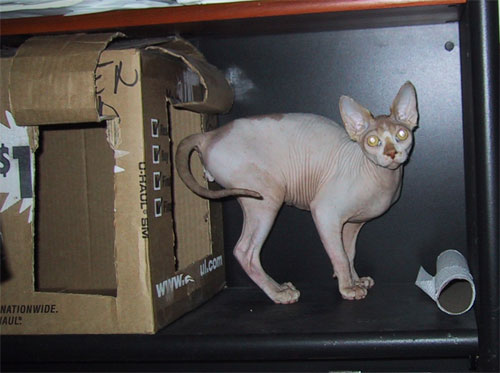