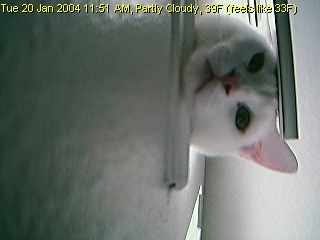 I suspect there is a subtle bug in one of the protocols Apple implements. I’m guessing it has to be higher-level than ARP, probably up around their custom DNS/resolver/Rendezvous or even higher up, like in the AppleShare protocol.

It would seem that connecting to the LAN using two network interfaces (the 100-base-T wire as well as the wireless) to copy files to/from iMac will sometimes cause the iMac to drop off the network. It can be fixed pretty easily by unplugging the network cable on the iMac, then plugging it back in again. I guess this causes the network hardware to reset and reobtain a DHCP address. In fact, this used to happen so much that I ended up plugging that computer into the switched-crossover port in the hub: hitting a toggle pushbutton reconfigures the port to a crossover port (disconnecting the iMac) and hitting it again reconnects it as a normal port.

The problem never comes up when I only have one network adapter active at a time. I turn off wireless and plug in the wire when I want to copy several gigs of data, then switch back again. Everything is great. But sometimes, I forget to turn off the wireless and the problem arises. I am guessing that there is some kind of name resolution problem going on since “Fibonacci,” the laptop, would now potentially resolve to two different IP addresses. Either something on the iMac chokes when two addresses are returned, or it attempts to respond to the incorrect address and the thing at that address is not listening or in an incorrect state, causing the iMac to choke.

Anyway, it is not a big deal. I either have to remember to connect to the LAN using only one network device or reset the network on the iMac. No lost data, no reboots, nothing major. I would be willing to bet that most people are never even in a situation where this would occur.