The reason The Precious was having occasional pukefests is that she has been eating Kate's fancy soap–a bar soap that is extremely soft and kept in a little bowl, not unlike a cat bowl, in the bathroom. I recently had to start leaving that particular bathroom's door open to equalize temperatures and prevent frozen pipes.

The strange stain on the floor that magically appeared in the computer room not too long after moving in, that we originally thought was a spilled beer, is cat bile. The computer room is where the kittens spent their first couple of weeks before being allowed to explore the rest of the house.

Those prickly spherical things growing on the trees outside that sometimes fall to the ground and sometimes are eaten by squirrels are chestnuts. Am I the only one who does not know this?

BitTorrent rocks when you can actually find what you are looking for. (Thanks, boogahsmalls!) I now have episodes 1, 2, 3, and 11 of Alias season 3 in HDTV format! I feel some experimentation with Final Cut, iDVD, and/or DVD Studio Pro is in order.

People outside of early 1900's Britain actually use treacle as an ingredient. I found a gingerbread recipe for the bread machine the other day that calls for treacle and molasses. Where do you even FIND treacle in this modern day and age?

RadioIO 80's is actually playing some good stuff this evening.

Metal business cards are COOL! (A bit expensive, and I would have to finally learn Illustrator to submit the correct artwork, but still COOL!) I am currently running low on my existing paper calling cards: 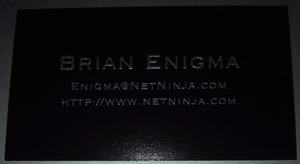 The cats like to dig paper shreddings from the trash can.

Wild Oats has, sadly, stopped carrying the “radiator” pasta. I forget the actual name, but it looks and sounds like radiator.