Holy crap! When do we get to take one of these to Mars to battle acid-blooded aliens??? 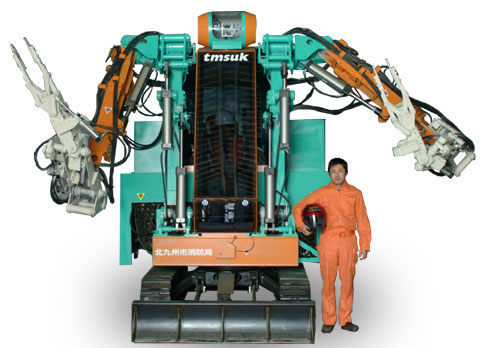 Speaking of Mars, I discovered the other day that we sent a Lego astronaut (or, as they are calling it astrobot) to Mars. It is basically there to act as something to get kids interested, marketing/advertising for Lego, and as a spindle to hold down a DVD of people's names (hopefully, guarding it well against martian spammers). Still, it is pretty cool. The first Legoman in space! Woot!

It seems a gigantor laptop attracts more attention up here than down in SoCal. Well, either that or people are more willing to chat about it. I was hanging out at the Borders today for half the day, debating whether or not to continue my T-Mobile Hotspot subscription, and five different people came up to me to chat about either the computer or Borders' wireless service. As I said, I am debating whether to continue paying for that wireless. Border's is not too far away from the house (plus it also works at the SIX Starbucks within two miles of the house). There are a bunch of free WiFi nodes around, but they are mostly downtown and are not free when you add in parking. As substitute pointed out, Borders runs their own cafe. For some reason, I thought both them and Barnes and Noble got their coffee from Starbuck's-overcooked-and-burnt-coffee-emporium, but nope. Up here, it is all Peet's Coffee, which is good. Plus, they have a nice Jasmine Green Tea which is tolerable. I would have preferred straight-up green, or perhaps a mix with a mint, but the Jasmine is not too bad.

Also, while at Border's, I got to overhear a number of conversations, including the hairdressers that own their own business and are looking for a way to automate it. They were looking for something more advanced than QuickBooks, but less $monkey than a custom IBM thingey. Then, there was the lady with two kids. She got them pizza from the cafe, which was too cold according to their loud complains. Those kids had the most elaborate and gigantic pop-up books. As I recall, one was a complete spooky castle and the other was a complete spooky mansion. These things seriously opened up to several cubic feet of structure per page and were meant to not be opened flat on the table, but sitting upright so that the spine is perpendicular to the table. They were from the discount bin, and I almost went over to check them out in detail and maybe get one. I did not do that tonight, but think I may have to go back tomorrow for further investigation.

I have a new floor lamp and a new table lamp. To round out my day of consumerism, I have a new, cheap miniature digital radio (the picture makes it look gigantic, but it really is tall-stack-of-credit-cards-tiny) because the one thing I cannot listen to with the iPod while sitting at a coffee shop is live NPR. Sure, I could stream it over the wireless, but why wear down the laptop battery with the extra drain of wireless activity plus audio decoding when I can offload that to a pair of AAA's? Speaking of NPR, the local affiliates, Oregon Public Broadcasting (OPB), seem to be really good at tying in their NPR and PBS offerings. I keep hearing adverts that go something like, “tune in your television at 6pm for Blah, then your radio at 7pm for Related-Blah.” I guess if you have the power over the local public radio and television and do not have to respond to advertisers' needs, you can do fun little tie-in's like that. Their new program Philosophy Talk has the potential of being really good, but makes me cringe at how bad it could easily end up being.

Feedle was right. Getting the latest SpamAssassin running on DreamHost (as opposed to the crufty old one they have installed system-wide on their Debian 3.0/woody boxes) was a piece of cake. Or maybe I should qualify that as “a piece of cake for someone used to './configure && make && make install' as well as messing with .procmailrc files.” It was not double-click and you are done, but it was pretty easy for a Unix program. It would be nice of Dreamhost to upgrade to a more recent procmail though, so I drop the wacky little 's/^rom: /From: /' workaround. Next up? Poking SPF records into my DNS, assuming Dreamhost and/or Register.com (the two places hosting DNS for various domains) give me access to TXT records.