Please note that all blog posts before 8 April 2007 were automatically imported from LiveJournal.  To see the comments and any LiveJournal-specific extras such as polls and user icons, please find the source posting at http://brianenigma.livejournal.com/2003/12/

Yeah, so for those that have not seen me since I arrived, there is a good reason for that. A couple of days ago, I went to my parent's house so we could carpool to see the grandmother. I promptly collapsed onto the sofa and remained there until this morning. Because of this nasty plague-flu, I got really icky, sweaty, and nasty. All of my toiletries and clothing are over at BC's house–I did not plan on spending the night (or nightS) at my parents, it just happened. Today, I started feeling a bit better and came to the realization that I needed a shower and some new clothes (yes, it was pretty gross), so hopped in the car and went to BC's. So, now I am showered, clothed, fed (mmmm….Tummy Stuffer), and sitting at the Borders on Newport and 19th.

While I was sick, my mom went out and got me a combo box of Tylenol Sinus Daytime/PM. I rarely take any sort of drug, not even asprin, so this stuff is having a big effect on me and a big side effect. The “PM” side of the box was good and allowed me to sleep. The “Daytime” side of the box is making me feel like a freakin' tweaker right now. You just would not believe the amount of concentration I have to put into this to keep focused on writing this entry. My ears and fingertips are alive and buzzing with unfocused and unfocusable energy. I have already had two panic attacks in the last few hours–both times I thought my heart had stopped, followed by the inability to locate a pulse in my chest, neck, or wrist. Something tells me this “Daytime” medicine is going into the trash. If muting the symptoms of sickness feels this much like a bad drug experience, I'll stick with the natural remedies or just continue to sniffle and cough.

Speaking of the corner of Newport and 19th–they put ticket-issuing traffic cameras in this intersection (and Newport an 17th) since I was last here. Every cycle of the lights at this particular intersection, it seems the cameras get someone. While I dislike this usage of technology for several reasons that I am sure the ACLU would agree with, part of me finds it funny that people are caught this often. I am not sure how much a ticket for running a red light costs, but the city must be making bank. It looks like, during the day at least, one ticket is issued every 30-120 seconds.

Okay, so now that I am feeling marginally better, is anyone up to seeing Paycheck sometime soon? I know Jeremy was talking about it the other day (and I forgot to bring it up when I ran into him at D's). I am not sure I am up to running around Disneyland yet, but would be happy to do something less physical like see a movie. It might also be nice to actually have a party sometime soon. There has been a 6-pack of Guinness and a Kelp Ale in the trunk since I got here that, aside from a Guinness on the first night, has remained untouched. On second thought, I'm not sure I am up to a party yet. Or, at least, I would like to make that decision when I am not feeling quite so buzzed. Gah! When will this stuff wear off???

Oh, and I still think that Denethor and W. were separated at birth… 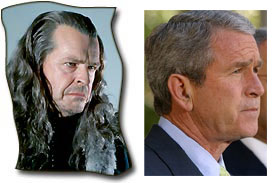